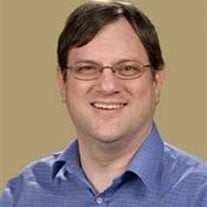 Services for Dr. Rodney A. Anderson will be held at 11:00 a.m., Thursday, March 15, 2012, at the Geneva United Methodist Church with Pastor Ron Harris officiating. Graveside services will follow the funeral at the Geneva Public Cemetery in Geneva, Nebraska. A public visitation will be held on Wednesday, March 14, 2012 from 1:00 p.m. to 8:00 p.m. at the Farmer & Son Funeral Home in Geneva. Memorials are directed to the family, the Geneva United Methodist Church, or to the Rodney A. Anderson Memorial Scholarship Fund. Rodney Allen Anderson was born to Rodger D. and Roine R. (Heath) Anderson on February 6, 1966 in Geneva, Nebraska and he passed away on March 7, 2012 at his home in Fresno, California. Rodney was one of three children in the family. Rodney was a member of the Geneva United Methodist Church and was baptized on May 15, 1966 and he was confirmed on May 16, 1979. Rodney grew up on the family farm and graduated from the Geneva High School with the class of 1984. While in high school, Rodney participated on the Speech Team and he excelled in the Extemporaneous speaking competitions. Rodney was also involved in the Geneva High School FFA and in 1983 he took an FFA Leadership Trip to Washington D.C. where he enjoyed seeing the Gettysburg Battlefields and other historic sights around Washington D.C. He also served as Secretary of the Geneva FFA during the 1983-84 school year. After high school, Rodney earned his bachelor’s degree at the University of Nebraska at Lincoln and graduated in 1988 with Highest Distinction. He earned his masters and doctorate degrees in Political Science at the Ohio State University in 1994. Upon earning his doctorate, Rodney taught for one year at Ohio State University and then he filled in for a professor at Arizona State University for a brief time. In 1996 he took a position at Fresno State University and served there until his passing. Rodney taught 200 students in five classes every semester and was known for taking on a variety of classes and enjoying a wide range of interests. Among the subjects he taught were introductory American politics, statistics, political behavior and comparative politics. He also was a volunteer mentor for students as part of the Ronald E. McNair Post-Baccalaureate Achievement Program. Aside from his political teachings, Anderson’s other loves were baseball and football. He attended the College World Series on several occasions, loved the Fresno State Bulldogs, Nebraska Cornhuskers, the Ohio State Buckeyes and enjoyed trivia games. Special times were had by Rodney and his family at Rosenblatt Stadium during the College World Series, especially when Fresno State won the National Championship in 2008. When Rosenblatt Stadium closed for good, Rodney had the opportunity to purchase two seats like the ones that he sat in during the 2008 Fresno State Baseball Championship, which he in turn donated back to the Fresno State Bulldog Baseball Program. Rodney also had a vast collection of movies, movie posters, and other movie memorabilia totaling over a thousand pieces and dating back from black and white movies to modern movies. He had a dedicated room in his apartment to house all of his collections. Rodney will be remembered as a caring and compassionate educator and friend and one that was committed and dedicated to the education of his students. Rodney was preceded in death by his mother, Roine Anderson; grandparents Melvin and DeVee Anderson, Arthur Heath; Grandmother and step grandfather Merl and Irene Archer; and Uncle Ron Heath. He is survived by his father Rodger Anderson of Geneva; brothers Ronald Anderson of Lincoln and Larry Anderson of Phoenix, Arizona; Uncles and Aunts Bernard and Carol Anderson of Henderson, NE, Lowell Anderson of Geneva, NE, Gary and Pat Anderson of Kearney, NE; Aunt Bonnie Heath of Lincoln, NE; and by many cousins, colleagues, and friends.

Services for Dr. Rodney A. Anderson will be held at 11:00 a.m., Thursday, March 15, 2012, at the Geneva United Methodist Church with Pastor Ron Harris officiating. Graveside services will follow the funeral at the Geneva Public Cemetery in... View Obituary & Service Information

The family of Dr. Rodney A. Anderson created this Life Tributes page to make it easy to share your memories.