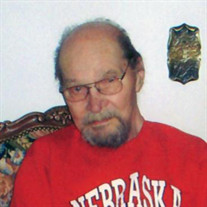 Private Family Funeral Services for Roger will be held on Thursday, January 12, 2017 at Farmer & Son Funeral Home in Geneva, Nebraska with Kim Dunker officiating. Public Visitation will be held on Wednesday, January, 11, 2017 from 1:00 p.m. - 8:00 p.m. with the family greeting public from 1:00 p.m. - 3:00 p.m. at Farmer & Son Funeral Home in Geneva, Nebraska. Memorials are to be directed to The Cat House Shelter or Capital Humane Society Graveside Services will be conducted from the Davenport City Cemetery in Rural Davenport, Nebraska. Roger (“Bill”) William Mountford passed away at the South Haven Living Center in Wahoo, NE, on January 9, 2017, with family at his side. Roger was born on November 21, 1926, in Davenport NE to Forrest and Irena (Astleford) Mountford. He graduated from Davenport High School in 1944, excelling in football. He then attended the University of Nebraska and was on the 1944 UNL football team. Roger remained an avid and supportive fan of the Huskers throughout his lifetime. He joined the Navy at the end of 1944 during World War II. He and his wife Donnis (Pumphery) owned the IGA grocery store in Davenport for 31 years from 1960 to 1991, before retiring to Lincoln, NE. He loved driving a bus for Davenport School for 17 years and especially enjoyed giving each child on his bus a large grocery sack of treats at Christmas. He became a resident of Saunders House Assisted Living Center in Wahoo in 2015 and then South Haven in 2016. Roger was known as a very caring, loyal, kind and generous person who loved his family and friends very much. He was very fond of all animals, especially dogs and cats. It was common to see dogs and cats waiting outside his grocery store for meat scraps. Roger is survived by his son Bill Mountford, Lincoln, son and daughter-in-law Tom and Diane Mountford, Lincoln, sister Jeanette Malone, Lincoln, two grandsons Doug Mountford, Council Bluffs, IA, and Evan Mountford, Lincoln, step-grandson Charles Michon, Lincoln, sisters-in-law Gerry Mountford, Omaha, and Marlene (Don) Beacom of Grand Island, many nieces, nephews, friends and his cat “Shadow”. He was preceded in death by wife Donnis, parents Forrest and Irena Mountford, brothers Stan and Alan Mountford, daughter-in-law Cheryl Mountford, father and mother-in-law Glen and Sadie Pumphrey, brother-in-law Tom Pumphrey and nieces Susan Moyer and Jill Mountford.

The family of Roger "Bill" William Mountford created this Life Tributes page to make it easy to share your memories.

Private Family Funeral Services for Roger will be held on Thursday,...

Send flowers to the Mountford family.