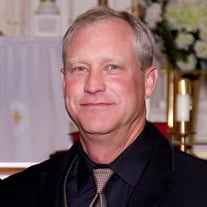 Roger Dean Johnson Jr. was born to Roger and J. Suzanne Barkmeier Johnson on October 30th, 1961, at Friend, NE and passed away on December 15, 2015 at Warren Memorial Hospital in Friend, NE at the age of 54 years, 1 month and 15 days. He was one of three children in the family. Roger was baptized, confirmed, and married at St. Stephen’s Catholic Church. After graduating in May of 1980, he went to Southeast Community College in Milford and graduated in March of 1982 with a Diesel Technology degree. Roger married Lisa Volkmer on August 20, 1982 and to this marriage there were two children born, Jessica on December 19, 1985, and Keegan on March 3, 1989. He joined the family farm after graduation and was a cattle feeder for several years. He had lots of good hired men to help him with all the farming duties and thoroughly enjoyed working with them all. On September 16, 2000, Roger married Margaret Koca and to them one child was born Elijah Johnson on November 12, 2001. Roger served on the St. Stephen Catholic Church Board, was a member of the Knights of Columbus and served as the secretary, and was an active Acolyte since 1988. He enjoyed being on the altar with both of his sons. Roger was a proud member of the Cordova Fire Department, since November of 1984 serving as a Vice President for several years, just couldn’t take the next step as President. Roger was active in Boy Scouts as a youth, and later helped Keegan with his badges. Roger was a member of the Exeter Feeder’s and Breeder’s from 1996 to 2007 and on their board of directors for eight years, secretary, vice president and President. In Roger’s spare time, he loved working with wood and made several projects for his family, friends, and refinished lots of items for people. In 2010, a new basement was put on at the house and he made sure he had room for an oak bar that he designed and crafted. Roger was also known as the “fix -it- guy.” He was a “jack of all trades” and he would say “master of none.” He pretty much could fix or repair most everything, if he couldn’t figure it out, duct or gorilla tape, bailing wire, or his favorite, a vise grip, in which he used to hold together the combine so he could finish harvesting one year. His goal was always to be done before his birthday, and usually this goal was achieved. He was blessed to have O positive blood type and able to donate 5 gallons of blood. An important goal on his bucket list was to learn how to scuba dive. He mastered the task and received the green light. He went to Puerto Rico, Cozumel Mexico, and was planning a trip this next year to another great unknown. He enjoyed spending time with his family and friends, doing numerous things from boating, fishing, golfing, skiing, hunting, sledding and enjoying a bowl of warm chili with Fritos, shredded mozzarella cheese, and sour cream, watching movies, hanging out by his bar, going out to eat, visiting with neighbors, working on projects, grilling and smoking various types of meats. Roger is survived by his wife of 15 years, Margaret of Exeter, NE, children Jessica & Joe Fehlhafer, Friend, NE, Keegan & Kathleen Johnson, Lincoln, NE and Elijah Johnson of Exeter, NE. Parents, Roger and Jane Suzanne Johnson, Exeter, sisters and brothers-in-law, Shari & Bill Miller, Clay Center, NE and Cindy & Kent Manning, Fairmont, NE, nieces and nephews, Derek & Danielle Miller, Lincoln, NE, Shannon and Aaron Tebo, Robinson, TX, Tyler Manning, Lincoln, NE, Brooke Manning & Mitchell Manning, Fairmont, NE, one great nephew Miller Tebo, Robinson, TX. Parents-in-law Joe and Pat Koca, Exeter. Sister-in-law Christine and David Michl, Friend, NE, brother-in-law Richard and Barb Koca, Fairmont, NE, Aunt Marilyn and Uncle Alvin Vyhnalek, Crete, NE, Aunt Sylvia Springer, Sun City, AZ, Aunt Barbara and Uncle Gail Heffelfinger, Exeter, NE numerous nieces and nephews, cousins, and friends. Preceded in death by grandparents Emory and Dagmar Johnson and Louis and Lucile Barkmeier, Uncle Dean Weber, Uncle George “Milo” Springer, Uncle Emory Allen Johnson, Uncle Lee and Aunt Shirley Zimmer. Funeral Mass will for Roger will be 10:30 a.m. Monday, December 21, 2015, at the St. Stephen's Catholic Church in Exeter, Nebraska. Graveside services will follow the Mass at the Exeter Cemetery. Rosary will be recited at 7:00 p.m. Sunday December 20, at St. Stephen's Catholic Church. Public visitation will begin Sunday from 1:00 pm until 5:00 pm at the Farmer Funeral Home in Exeter, Nebraska and then at the church from 6:00 pm until rosary. Then again before the Funeral Mass on Monday. Memorials are directed to the St. Stephen's Catholic Church of the Cordova Volunteer Fire Department in lieu of flowers.

Roger Dean Johnson Jr. was born to Roger and J. Suzanne Barkmeier Johnson on October 30th, 1961, at Friend, NE and passed away on December 15, 2015 at Warren Memorial Hospital in Friend, NE at the age of 54 years, 1 month and 15 days. He was... View Obituary & Service Information

The family of Roger D. Johnson Jr created this Life Tributes page to make it easy to share your memories.