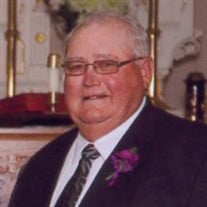 Roger Dean Johnson Sr. was born to Emory and Dagmar (Rasmussen) Johnson on May 17, 1939 on a farm in York County Nebraska. He passed away on February 20, 2017 at Banner Boswell Medical Center in Sun City, Arizona. He was the fourth of five children. The farm where Roger was born was near the farm where he lived most of his life. It was the home place where his father, Emory, was born. Roger later moved just a half mile away when he purchased the farm of Arden and Eyvonne Johnson. Roger was baptized and confirmed in the Danish Lutheran Church in Cordova, NE. Roger had a tractor accident when he was thirteen years old while he was driving it. The tractor ran over him causing back problems for the rest of his life. He graduated from Exeter High School in 1956. He joined the Nebraska National Guard following graduation from high school. Roger took his basic training at Fort Leonard Wood, Missouri. In 1958 he married his high school sweetheart, Suzanne (Barkmeier). Three children were born to this union. Roger was a farmer all of his life. He started feeding cattle with his dad when he was still in high school. They fed together many years and later with his son, Roger Jr. This was the only occupation that he ever considered doing. He was a member of the Exeter Feeders and Breeders Association for several years and served on the board of that organization. He won the tractor driving contest at the State Fair as a young man, and received a Young Farmer Award in his early years farming. Roger drove a truck to Omaha and St. Joseph, MO for Ralph Kubicek at an early age and also for S & A Trucking while he was farming. Roger also served on the board of the Cordova elevator. He was a member of the Cordova Volunteer Fire Department for several years. Roger enjoyed taking trips in his RV with family and friends. In recent years he enjoyed traveling to a warmer climate during the cold winter months in his fifth wheel RV. Roger was preceded in death by his son, Roger Dean Johnson, Jr, parents Emory and Dagmar Johnson, sister Shirley Zimmer, brother Emory Allen Johnson, brothers-in-law Lee Zimmer, Dean Weber, and George (Milo) Springer. Roger is survived by his wife, Suzanne, of fifty-eight years; his daughter, Shari (Bill) Miller of Clay Center, NE; Cynthia (Kent) Manning of Burress, NE; his daughter-in-law, Margaret Johnson of Exeter. He was also proud of his eight grandchildren: Derek (Danielle) Miller of Lincoln, NE; Shannon (Aaron) Tebo of Robinson, TX; Jessica (Joseph) Fehlhafer of Friend NE; Keegan (Kathleen) Johnson of Lincoln, NE; Elijah Johnson of Exeter, NE; Tyler, Brooke & Mitchell Manning of Burress, NE; and Two great-grandchildren, Miller Tebo and Kal Johnson and he was looking forward to a baby girl this coming June. He is also survived by two sisters, Sylvia Springer of Sun City, AZ, and Marilyn (Alvin) Vyhnalek of Crete, NE; sister-in-law and brother-in-law Barbara and Gail Heffelfinger of Exeter, NE; and many nieces, nephews, and friends. A funeral service for Roger was held on Saturday, February 25, 2017 at 10:30 a.m. at the Trinity Lutheran Church in Cordova, Nebraska. Pastor Michelle Kanzaki officiated the service. Amy Emshoff accompanied Randy Kaliff in the singing of “How Great Thou Art,” and she also accompanied the congregation in the singing of “Amazing Grace.” Pallbearers for the service included Derek Miller, Keegan Johnson, Tyler Manning, Mitchell Manning, Elijah Johnson, Joseph Fehlhafer, Aaron Tebo, and Garrett Pribyl. Honorary bearers included Jessica Fehlhafer, Shannon Tebo, Brooke Manning, Danielle D’Amore-Miller and Kathleen Johnson. Interment was held in the Exeter Cemetery following the funeral service. Memorials are directed to the family for future designation. Farmer Funeral Home of Exeter conducted the services. Online condolences may be left at www.farmerandsonfuneralhome.com.

Roger Dean Johnson Sr. was born to Emory and Dagmar (Rasmussen) Johnson on May 17, 1939 on a farm in York County Nebraska. He passed away on February 20, 2017 at Banner Boswell Medical Center in Sun City, Arizona. He was the fourth of five... View Obituary & Service Information

The family of Roger D. Johnson Sr. created this Life Tributes page to make it easy to share your memories.