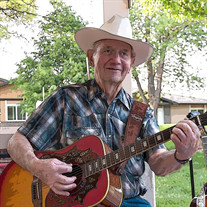 A Funeral Service for Roger will be held on Friday, October 29, 2021 at 10:30 a.m. at the United Methodist Church in Geneva, Nebraska with Pastor Doug Griger presiding. Visitation will be held on Thursday, October 28, 2021 from 1:00 p.m. until 8:00 p.m. with family present from 5:00 p.m. until 7:00 p.m. at Farmer & Son Funeral Home in Geneva, Nebraska. Military Graveside Services will be conducted following the funeral service at the Geneva Public Cemetery in Geneva, Nebraska. Memorials are to be directed to the family to be designated at a later date. Roger LeRoy Pittard was born to John Adam Pittard and Rouene Winnifred (Ritchey) Pittard on April 3, 1929 in Geneva, Nebraska. One of two children, Roger lived his entire life on the family farm three miles northwest of Geneva. He attended District #81 for eight years and graduated from Geneva High School in 1946. Roger farmed his entire life, except for the two years he served as a tank mechanic in the United States Army with the 48th Anti-Aircraft Artillery Automatic Weapons Battalion from 1951 to 1953 in Erlangen, Germany. Prior to leaving for Germany, Roger and his best friend Joe Schelkopf went on a fishing trip to Minnesota. While he was there, he met a girl named Mary Rudduck and he asked her if she would write him while he was overseas. Mary agreed, and they stayed in touch through letters even after he returned home. In November of 1956 he asked Mary to visit him in Geneva on her way home for Thanksgiving from Texas to Minnesota. At the end of that one short weekend together they were engaged to be married. Roger was married to Mary Olive Rudduck in Marble, Minnesota on March 9, 1957 at the United Methodist Church. Roger and Mary had three children, Catherine (Pittard) Fairbanks, Kent Pittard, and Mark Pittard. Roger and Mary raised their children in Geneva, Nebraska on the family farm. Roger had many hobbies to keep him busy outside of farming. He was a lifelong member of the Geneva United Methodist Church, an active rockhound from coast-to-coast, and he enjoyed traveling and camping. Roger spent much of his time sharing his knowledge and love of rocks with family, friends, and students from area schools. He enjoyed trapshooting, and had helped to organize the Geneva Gun Club in the late 1940’s. Roger also had a love of music and dancing. He called square dances all over the state of Nebraska, from Grand Island to Omaha and from Columbus to the Kansas Border. He even called square dances in Germany. Roger also loved to play his guitar. He was one of the three original members of the band The 29ers, along with his brother-in-law Joe Schelkopf and JR Stewart. They played jam sessions and gigs all around the area. Roger was preceded in death by his wife Mary (Rudduck) Pittard, his parents, John Adam Pittard and Rouene Winifred (Ritchey) Pittard, and sister Joan (Pittard) Schelkopf. He is survived by his children Catherine (Pittard) Fairbanks, and husband Tim, Kent Pittard and wife Lisa, Mark Pittard and wife Anne; grandchildren Jeremy Fairbanks and special friend Kristin Mach, Amber Popowski and husband Mark, Amanda Burris and husband Blaine, Heather Pittard and fiancé Darren Fitzgerald, Jon Pittard and wife Samantha, Leah Fischer and husband Jon, Callie Pittard and fiancé Michael Miller; and eleven great-grandchildren.

A Funeral Service for Roger will be held on Friday, October 29, 2021 at 10:30 a.m. at the United Methodist Church in Geneva, Nebraska with Pastor Doug Griger presiding. Visitation will be held on Thursday, October 28, 2021 from 1:00 p.m. until... View Obituary & Service Information

The family of Roger L. Pittard created this Life Tributes page to make it easy to share your memories.

A Funeral Service for Roger will be held on Friday, October 29,...

Send flowers to the Pittard family.