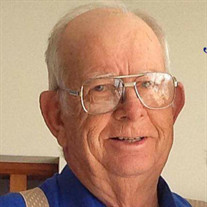 Roger R. Remter passed away on June 22, 2017, at St. Elizabeth’s Hospital in Lincoln, NE at the age of 76. He was born to Richard and Mary (West) Remter on January 22, 1941 in Lincoln, NE. Roger was one of two children in the family. He was a loving husband, father and grandfather. Roger grew up north of Eagle, NE until the age of 7 when the family moved to Havelock, NE. He attended Northeast High School in Lincoln. He was baptized and confirmed at Evangelical United Lutheran Church in Havelock. Roger married Evelyn Sterns of Lincoln in May of 1959 and together they had 4 daughters. Roger later married Beverly Jeffery on Oct 31, 1964 and moved to Marion, KS with his 4 daughters and wife. Roger and his family lived in several areas wherever his work took him, but always came back to Nebraska. He enjoyed working as a horse trainer, at the railroad and as a machinist. Roger married Betty Deke February 21, 1998 and moved to Ohiowa where he lived for the rest of his life. Roger retired from Alpo in Crete in 1999 due to health reasons. While in Ohiowa he enjoyed running the Keno Games at his wife’s restaurant in Geneva and he made many new friends and acquaintences while doing this. Roger also swathed many acres of hay for area farmers while working with Joe Birky and meeting many more friends. Roger’s love of animals was the highlight of his life. His love of horses and dogs was with him his entire life. He enjoyed hunting and fishing and socializing with friends. He could start up a conversation with a stranger and talk for hours. Roger was a member of St. John’s Lutheran Church in Ohiowa, NE and was a member of area Gun Clubs and Hunting Clubs. He was preceded in death by his parents Richard and Mary Remter and his previous wife Beverly. He is survived by his wife Betty of 19 years, daughters Tammy (Jeffrey) Lembke of Olathe, KS, Tata (Ron) Pike of Sharpsburg, GA, Terry (Lynn) Grant of Ashland, NE, Dora (Mario) Flores of Fairbury, NE, stepsons David Deke of Gretna, NE, Daniel Deke of Los Angeles, CA, Darin Deke of Denver, CO, 9 grandchildren and sister Sue (Monte) Ray of Lincoln, NE 2 nieces and many friends. Funeral service for Roger will be 10:30 am Monday, June 26, 2017 at the St. John's Lutheran Church in Ohiowa, Nebraska with Pastor Jim Germer officiating. Visitation will begin Sunday 1:00 pm until 8:00 pm at the Farmer & Son Funeral Home in Geneva, Nebraska with family greeting friends from 5:00 pm until 7:00 pm Graveside service will be 2:30 pm Monday, June 26, 2017 at the Lincoln Memorial Park Cemetery in Lincoln, Nebraska located at 6800 South 14th Street. Memorials are directed to the family for later designation.

The family of Roger R. Remter created this Life Tributes page to make it easy to share your memories.

Send flowers to the Remter family.