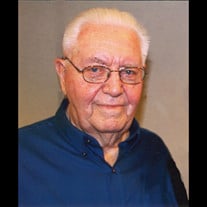 Roland Eugene Saltzman was born on July 8, 1931, on a farm southeast of Shickley, Nebraska, the fourth of ten children of Ben and Gertrude (Schweitzer) Saltzman. He attended the country school located near the family farm. Roland was very involved with farm work at a young age, doing chores and field work. He started out farming with horses and working with a threshing crew as a youth. He accepted Jesus as his personal savior as a teenager and became an active member of Salem Mennonite Church. He met Leona Dora Goossen from Oakley, Kansas, when he was visiting his cousins at Hesston College. In the fall of 1952, he went to Denver, Colorado, to do alternative service as a conscientious objector during the Korean War. He worked in a hospital laundry and then as a rabies control officer for the city of Denver. Roland and Leona were married on June 20, 1954, spent two years in Denver, and then returned to Shickley. They have four children: Roland Gene, Linda Jo, Jenny Elaine, and Brian Charles. After moving back to a small house in Shickley, Roland farmed with his father and also was employed by Fillmore County as a gravel truck driver and at Shickley Grain Co. as an attendant. In 1960, Roland and the family moved to their home in the country where they lived for 22 years. Roland and brothers Don and Aubrey started Saltzman Brothers Trucking Company in 1959, hauling cattle, rock, and grain. Later, brothers Darreld and Gary joined the partnership. Saltzman Inc. became the trucking company and Saltzman Bros. became the farm partnership. He was involved in the trucking company for 46 years and was proud of the accomplishment of driving over three million accident-free miles. Trucking and farming were Roland’s life work. Roland retired in 1996, and he and Leona purchased a house in Phoenix, Arizona. Roland enjoyed winters there, returning to Nebraska in the summer to work on antique tractors and participate in antique tractor shows, parades, and tractor pulls. Roland also restored a 1952 Buick, which he took to car shows and parades—it was the same model of car he had when he and Leona were newlyweds. Roland and Leona moved to Heritage Crossings in Geneva, Nebraska, in 2016. Roland passed away on Sunday, January 6, 2019, while under hospice care, at the age of 87 years, 5 months and 10 days. He was preceded in death by his parents Ben and Gertrude (Schweitzer) Saltzman, son Brian Saltzman, brother Gaylord Saltzman, and sisters Ruby (Saltzman) Kennel and Bonnie (Saltzman) Stutzman. He is survived by his wife Leona (Goossen) Saltzman, son Gene (Lynette) Saltzman; daughters Linda (Wesley) Hochstetler and Jenny (Scott) Eichelberger; grandchildren Heidi Hochstetler, Melissa (Isaac) Landis, Rachel (Tim) Balzer, Sydney (Bill) Conner, Mikki (Mark) Bowman, Rebecca (Logan) Orpin, Nicholas Eichelberger, and Elizabeth Eichelberger; great-grandchildren Owen, Max, and Anna Landis, Bailey Conner, Eli and Elora Bowman, and Miles Balzer; siblings Don Saltzman, Darreld (Rhonda) Saltzman, Mattie (Don) Kuhns, Aubrey (Glenda) Saltzman, Barbara (Larry) Eichelberger, and Gary (Donna) Saltzman; and many friends. A Funeral Service for Roland was held on Thursday, January 10, 2019 at 10:30 a.m. at the Salem Mennonite Church, rural Shickley. Pastor Shawn Nolt officiated the service. Special Music was provided by Roland’s Grandchildren and included: “Precious Lord, Take My Hand,” “Come To Jesus,” and a hymn medley of “I’ll Fly Away/Leaning On The Everlasting Arms.” The postlude consisted of some of Roland’s favorite recorded selections. Pallbearers for the service included Nick Eichelberger, Sydney Conner, Bill Conner, Isaac Landis, Mark Bowman, Tim Balzer, and Lorgan Orpin. Interment was held in the Salem Cemetery following the Funeral Service. Farmer & Son Funeral Home of Geneva was in care of the arrangements and online condolences can be left at www.farmerandsonfuneralhome.com Memorials are suggested to the Salem Mennonite Church.

Roland Eugene Saltzman was born on July 8, 1931, on a farm southeast of Shickley, Nebraska, the fourth of ten children of Ben and Gertrude (Schweitzer) Saltzman. He attended the country school located near the family farm. Roland was very... View Obituary & Service Information

The family of Roland E. Saltzman created this Life Tributes page to make it easy to share your memories.