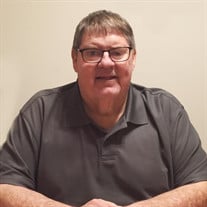 Ronald John Kuska was born in Friend, Nebraska on July 28, 1958, to Verlyn and Joan (Harre) Kuska. After a courageous battle with pancreatic cancer, Ron passed away on June 6, 2021, at Bryan East Hospital in Lincoln, Nebraska at the age of 62 years, 10 months and 9 days. Ron was the oldest of 3 children and loved his siblings dearly. He attended St. Stephen’s Catholic School and Exeter Public School, graduating with the class of 1976. At the age of 13, Ron began working construction, first for Dick Erdkamp, next for Wayne Petersen and eventually, starting his own business, RK Construction. He then took a job at Exeter Public Schools as a custodian for 15 years. Ron still had the desire to be involved with construction, so he started working at Lincoln Lumber and finally, for the last year and a half, at Seward Lumber. He had a way with his customers. His experience and knowledge of lumber materials made him an outstanding salesman. He had customers call him from near and far. While working at the school, Ron met the love of his life, Colleen Ohnoutka. Ron and Colleen were married on August 4, 2001, in Weston, NE. They enjoyed their time together, whether it be with family, friends or just going out for a quiet evening. Ron and Colleen went on several vacations, with Branson being one of their favorites. Ron’s most loved trip was his 50th birthday party in Las Vegas! What a time he had! Ron’s nieces and nephews were his pride and joy! He looked forward to any time that they could come to Exeter. He left them with many fond memories of attending their sports and school activities, taking them for golf cart rides, teaching them how to drive, taking them swimming and playing many card games and games of hide-and-seek. He knew this actually gave him the opportunity to act like a kid again! Butchie, as he was affectionately called, loved Exeter. When he started employment out of town, he would come home and ask what had happened in town during the day, fearing he had missed something big!! He was involved in various organizations and activities. For 35 years, he was a member of the Exeter Fire & Rescue Department. He had a very caring way with the people he tended to on rescue calls. Ron was also a member of the Sons of the Legion and the Knights of Columbus. For a few years, he coached Little League Baseball and truly enjoyed it. He was a dedicated community member! Ron’s big heart was his trademark. He would help anybody who needed something. The word “No” was not in his vocabulary when it came to others. If there was a card game of some sort being played, he was involved. A trip to the casino was mentioned, and he was ready to go in seconds! Ron had the pleasure of having more than 60 first cousins. He loved every one of them and made his best effort to see them whenever schedules allowed. Ron was preceded in death by his dad, Verlyn; and grandparents, John and Julia Kuska and John and Theresa Harre. He is survived by wife, Colleen, Exeter; mother, Joan, Lincoln; brother, Wayne (Terri) Kuska, Overland Park, Kansas; sister, Connie (James) Bayless, Lincoln; in-laws, LeRoy & Lil Ohnoutka, Weston; brothers-in-law & sisters-in-law, Kevin & Deb Ohnoutka, Kansas City, Missouri; Brian & Linda Ohnoutka, Lincoln; Craig & Barb Ohnoutka, Valparaiso; nephews, Kenny Ohnoutka, Scottsdale, Arizona; Travis Ohnoutka, Lincoln; nieces, Andres (Scott) Davis, Lincoln; McKenzie (Erik) Bruening, Omaha; Katie Bayless & fiancé, Jake Kuhn, Lincoln; Kylie Kuska, Council Bluffs, Iowa; Laura (Paul) Ganow, Gretna; Ashley (Tyson) Carlson & Braxton, Valparaiso; Brittany Ohnoutka, Lincoln; Katie Ohnoutka, Lincoln; Rachael (Reese) Graue & family, Kearney, Missouri; and Melissa (Chris) Bolek & family, Kansas City, Missouri. Ron is also survived by a multitude of friends and extended family, who had special places in his heart. Ron loved being the life of the party and making people laugh. His hearty laugh, booming voice, sense of humor, jokes and fun-loving ways will truly be missed. As Ron’s cousin, Kevin Harre, appropriately said, “Heaven just got a whole lot louder and a heck of a lot more fun!” Rest in peace, Butchie! A Memorial Mass for Ron was held on Friday, June 11, 2021 at 10:30 a.m. at St. Stephen Catholic Church in Exeter, Nebraska. A Rosary was prayed at 10:00 a.m. prior to the Mass. Father Brendan Kelly & Father Ken Borowiak officiate the services. Shirley Milton was the accompanist and Mariah Ruhl was the Cantor and they led the congregation in the singing of “Amazing Grace,” “Lord, When You Came To The Seashore,” “How Great Thou Art,” and “Be Not Afraid.” Honorary pallbearers for the service include Andres Davis, Katie Bayless, McKenzie Bruening, Kylie Kuska, Kenny Ohnoutka, Laura Ganow, Ashley Carlson, Katie Ohnoutka, Travis Ohnoutka, Brittany Ohnoutka, Rachael Graue, and Melissa Bolek. It was Ron’s wish to be cremated and his ashes will be interred at a later date. Farmer & Son Funeral Home was in care of the arrangements and online condolences can be left at www.farmerandsonfuneralhome.com Memorials are suggested to St. Stephen Catholic Church or Exeter Fire & Rescue.

Ronald John Kuska was born in Friend, Nebraska on July 28, 1958, to Verlyn and Joan (Harre) Kuska. After a courageous battle with pancreatic cancer, Ron passed away on June 6, 2021, at Bryan East Hospital in Lincoln, Nebraska at the age of... View Obituary & Service Information

The family of Ronald J. "Butchie" Kuska created this Life Tributes page to make it easy to share your memories.