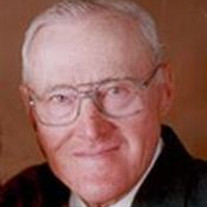 Ronald R. Rippe was born December 22, 1929 to Frank and Martha (Schweer) Rippe of rural Ohiowa, Nebraska. He passed away on September 9, 2013 at Fairview Manor at Fairmont, Nebraska where he had called home for the last three months, three weeks. Ron was 83 years, 8 months and 19 days old. Ron was the youngest child in his family. He had a sister Esther who married Paul Zimmerman and a brother, Clarence who married Loretta Markey. He was baptized on February 23, 1930 and confirmed on April 18, 1943 at the St. John’s Lutheran Church (now known as Grace Lutheran) south of Ohiowa. His confirmation verse was Psalm 146 verse 5 “Happy is he, that hath the God of Jacob for his help, whose hope is in the Lord his God.” Ron attended country school at District 34 and graduated from high school in Ohiowa, Nebraska, District 40 in 1947. On September 1, 1948 he enlisted in the Air Force. He was stationed at Lackland Air Base in Texas and Loury Field in Colorado. After serving his time in the reserves he was honorably discharged in 1953. In 1951 he married his high school sweetheart Mary Ann Soukup. On June 17th of this year Ron and MaryAnn celebrated their 62nd anniversary with dinner, flowers and music at the Fairview Manor. Two children were born of this union, David and Rhonda. Ron farmed and raised cattle all of his life until his health did not permit. Ron was a life long faithful member of Grace Lutheran. He served numerous times on the church council in every office. He served as the head of the Sunday School and taught many Sunday School classes during his life as well as serving on the Church Cemetery Board . He was very proud of the fact that four generations of his family served as President of the church, his father, himself, both of his children, David and Rhonda and now grandson, Drew. Ron was a former member of the Ohiowa Chamber of Commerce and the Thayer County Feeders. He has been an active member of American Legion Post 193 and had served as Adjutant, Vice Commander and Commander. Ron’s life centered around family, church and the Ohiowa community. He was predeceased in death by his parents, Frank and Martha Rippe; sister Esther Zimmerman and husband Paul; brother Clarence Rippe and wife Loretta. He is survived by wife Mary Ann; son David and wife Debra of Bruning; daughter Rhonda Kendall and husband Mark of Ohiowa. Grandchildren: Seth and Katie Rippe, Sydney and Tim Hecke all of Cedar Rapids, Iowa, Ross Rippe of Omaha, Nebraska and Drew Kendall of Ohiowa, Nebraska. Great granddaughters Kara Hecke and Avery Rippe. Brother-in-law, Mike Soukup, nieces and nephews, together with a host of many, many friends and other relatives. Funeral services 2 p.m., Friday, September 13, 2013 at the Grace Lutheran Church rural Ohiowa, Nebraska. Visitation Thursday, from 2 p.m. until 8 p.m. at the Farmer & Son Funeral Home in Geneva. Military graveside services at the Grace Lutheran Church Cemetery. Memorials are in care of the family.

Ronald R. Rippe was born December 22, 1929 to Frank and Martha (Schweer) Rippe of rural Ohiowa, Nebraska. He passed away on September 9, 2013 at Fairview Manor at Fairmont, Nebraska where he had called home for the last three months, three... View Obituary & Service Information

The family of Ronald Rex Rippe created this Life Tributes page to make it easy to share your memories.

Send flowers to the Rippe family.