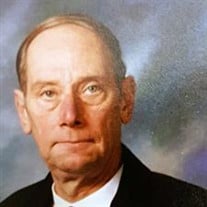 Funeral Services for Ronald will be held on Monday, October 10, 2016 at 2:00 p.m. at Farmer & Son Funeral Home in Geneva, Nebraska with Pastor Michelle Gowin officiating. Visitation will take place on Monday, October 10, 2016 from 12:00 p.m. until the start of the funeral service at 2:00 p.m. at Farmer & Son Funeral Home in Geneva. Memorials are directed to Geneva VFW, Samuel J. Marsh Post 7102, 1018 G Street, Geneva, Nebraska 68361 Military Graveside Services will be conducted at Geneva Public Cemetery by Geneva VFW, Samuel J. Marsh Post 7102. Ronald Dale Thoman, 74 years of age, of Utica, Nebraska, passed away on Wednesday, October 5, 2016 at the Utica Community Care Center in Utica. Ronald was born on July 29, 1942 in York, Nebraska the third of four children born to Loring and Margaret (Hillgren) Thoman. He graduated from Shickley High School class of 1959. In 1964, Ronald was inducted in to the United States Army, serving in Germany. He was honorably discharged in 1966. On November 15, 1970, Ronald was united in marriage to Mary Legband. To this union three children were born; Sonja, Anthony, and Angela. The family made their home in Utica, Nebraska. Ronald spent the majority of his career working as a mechanic at Herpolsheimers in Seward, Nebraska. He was preceded in death by his parents and brother. He leaves to mourn his passing, his wife, Mary Thoman of York, Nebraska; daughter Sonja Thoman of Falls City, Nebraska; son, Anthony Thoman and his fiance, Jodi of York, Nebraska, daughter Angela King and her husband Tim of Lincoln, Nebraska; two grandchildren; Bryce Thoman and Alicia Thoman along with two sisters, Dianne Weber of Hendersonville, North Carolina and Renee Zepeda of Paso Robles, California, as well as other relatives and a host of friends.

The family of Ronald Dale Thoman created this Life Tributes page to make it easy to share your memories.

Funeral Services for Ronald will be held on Monday, October 10,...

Send flowers to the Thoman family.