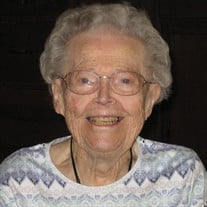 Rose Marie Hulse was born to John H. Kotas and Anna (Koca) Kotas on March 15, 1926 at the family farm near Milligan, NE and passed away July 23, 2015 at the York General Hospital at the age of 89 years, 4 months 8 days. She was one of two children in the family. She grew up in rural Milligan, NE and was baptized and confirmed at the St. Wenceslaus church. She attended country school and graduated from Milligan High School in 1943. After graduation she worked at the Fairmont Air Base. Rose Marie was married to Merlin Hulse of Friend, NE on October 14, 1947 and to them two children were born. They lived on two different farms north of Exeter. In 1961 they purchased their own farm where Rose Marie was a homemaker and helped Merlin with the farming and custom businesses. She remained and carried on the farming operations after the death of her husband Merlin on March 31,1992. She moved to assisted living in Fairmont, NE on May 27, 2015. In the1970’s she became very interested in genealogy. She was a charter member of the Nebraska State Genealogical Society and served as librarian for 18 years. She organized the Filmore Heritage Genealogical Society in 1980 and helped compose the 1998 Milligan Centennial History Book. She enjoyed doing genealogy research for people all over the United States. Rose Marie was a member of the Milligan Legion Auxilary Unit 240 and the Milligan Lodge #76 Western Fraternal Life Assn. for 77 years. Rose Marie was preceded in death by her parents, husband and brother Joe Kotas. She is survived by her son, Kenn Hulse and Jan Givens of York, NE, and her daughter, Karolyn Andrews and husband Jerry of Witchita, KS, granddaughters Connie and Brenda Andrews of Andover, KS, Jennifer Martin, Laura Tanner and Steve Simon and great-grandchildren Ashleigh Tanner, Avery Tanner and Rees Simon all of Phoenix, AZ, and nieces and nephew. Rose Marie loved her family and enjoyed talking to her friends. She will be remembered for always having a smile and never knowing a stranger at least not for very long. Graveside Memorial services for Rose Marie were held July 27, 2015, at 10:30 a.m. at the Cesky Bratri (North) Cemetery with Father Rand Langhorst officiating. Memorials are directed to the Milligan American Legion Auxiliary. Farmer & Son Funeral Home conducted the services.

Rose Marie Hulse was born to John H. Kotas and Anna (Koca) Kotas on March 15, 1926 at the family farm near Milligan, NE and passed away July 23, 2015 at the York General Hospital at the age of 89 years, 4 months 8 days. She was one of two children... View Obituary & Service Information

The family of Rose Marie Hulse created this Life Tributes page to make it easy to share your memories.

Send flowers to the Hulse family.