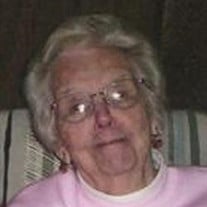 Ruby LaVerne (Keil) Real was born to William Henry Keil and Josephine (Schreiner) Keil on June 16, 1918 at a farm near Exeter, Nebraska and passed away July 7, 2014 at Fairview Manor in Fairmont, Nebraska at the age of 96 years and 21 days. She was one of three children in the family. She was born and raised on the family farm until her early teens when the family moved to another farm and a new home built by her father a mile west. When her mother passed away at about this same time, she took over housekeeping and cooking tasks for her and her father at a very young age. She graduated from Fairmont Public High School where she earned a teaching certificate. Upon marriage, she lived on a farm three miles north of Fairmont until 1970 when she and her husband moved into town. They continued to live on their own, attesting to their strengths of character, until 2010 when they moved to Fairview Manor in Fairmont. They were married for 73 years. Ruby was married to Everett F. Real of Fairmont, Nebraska, on August 15, 1937 and to them three children were born. Ruby was a member of the Federated Church in Fairmont where she taught Sunday school, Bible School and served on various committees. She was a diligent contributor and participant at the annual church Bazaar - dressing chickens and making candy to help provide funding for the church. She was a active member of the Sunshine Circle serving as an officer, often leading devotions and always looking forward to their meetings. Ruby enjoyed crossword and wood search puzzles, gardening, house plants, sewing and cooking, especially bringing smiles to the faces of family members by preparing their favorite dish. She loved springtime and the flowers that accompany that season. Everyone that knew her can attest she loved the color pink - which was displayed in her home, the cards and gifts she received, and the clothing she wore. She was a loving wife and mother with strong moral character and a gentle soul. She strove to find the best in everyone and spoke ill of no one. Family was of utmost importance to Ruby which was displayed lovingly through her cooking, sewing and caring for her children and grandchildren. Equally important was remembering and sharing family past. She enjoyed looking at family photos, teaching children and grandchildren about their family heritage. A favorite and frequently shared memory, complete with photo, was that of her childhood dog, Brownie. Another favorite story was when she and at that time, husband-to-be Everett, attended the Military Ball at the University of Nebraska . Ruby was preceded in death by her husband Everett Real, Fairmont; William and Josephine (Schreiner) Keil, parents; Erma (Keil) and Kenneth Perkins, sister and brother-in-law; Ralph and Clara Keil, brother and sister-in-law; Rex and Evelyn Real, brother-in-law and sister-in-law all of Fairmont; Raymond Real, brother-in-law of Glastonbury, CT; Beverly Swanson of Lincoln and Charlene Bristol of Fairmont, nieces. She is survived by Shirley and Michael Young, daughter and son-in-law of Omaha, Nebraska; Marvin Real, son of Venango, Nebraska; Bonnie Ackerman and Craig Jones, daughter and son-in law of Lincoln and by Jody Parkos, Nicholas Ackerman, Lori Allen, Greg Ackerman, Jason Young and Nicole Abrahams, grandchildren; eight great-grandchildren; nieces and nephews, as well as many friends and the staff at Fairview Manor. Funeral services were conducted from Farmer and Son Funeral Home, Geneva, Nebraska on Saturday July 12, 2014 with Rev. Diana Kuhl officiating. A special tribute to his grandmother's memory was provided by Nick Ackerman. The musical selections, "Into Your Hands" and "The Lord's Prayer" were prerecorded with Teresa King as vocalist accompanied by Shirley Young. A favorite hymn of Ruby's, "My Jesus, I Love Thee", was also provided. Pall bearers were Greg Ackerman, Dave Bristol, Don Bristol, Robert Galusha, Galen Real, and Mark Hanson. Interment was in Fairmont Public Cemetery with Farmer and Son Funeral Home in charge of arrangements. Memorials are directed to the family to be designated at a later date.

Ruby LaVerne (Keil) Real was born to William Henry Keil and Josephine (Schreiner) Keil on June 16, 1918 at a farm near Exeter, Nebraska and passed away July 7, 2014 at Fairview Manor in Fairmont, Nebraska at the age of 96 years and 21 days.... View Obituary & Service Information

The family of Ruby L. Real created this Life Tributes page to make it easy to share your memories.

Send flowers to the Real family.