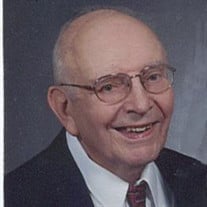 A Funeral service for Rudy will be 11:00 a.m. Tuesday, December 13, 2016, at the United Methodist Church in Milligan, Nebraska with Rev. Larry Spousta and Pastor Brad Barrows officiating. Visitation will begin Monday at 4:00 p.m. until 8:00 p.m. at the Farmer & Son Funeral Home - Kotas Chapel in Milligan, Nebraska. Memorials are directed to the United Methodist Church in Milligan, Nebraska Cremation will follow the service and private family committal of ashes will take place at a later date. Rudy Spousta, son of Rudolph and Rose Jindra Spousta, was born on December 14th, 1922 near Milligan Nebraska. Rudy was a 1941 graduate of Milligan High School and served three years in the U.S. Air Force. Rudy met Betty Jean Sefrna in 1946 at Saline Center. A simple dance proved to be love at first site! After a year and a half, during which they attended many dances—and an occasional movie—Rudy and Betty were married in a ceremony held in the front room of the Sefrna home on June 2, 1948. The couple began their new life in Milligan, NE. Rudy, having attended Coyne Radio School in Chicago, soon recognized the need and opportunity for an appliance store that would serve the needs of local citizens. “Rudy’s Appliance” was opened in 1950. His work provided great purpose and joy. Rudy was known for his honest business practices and integrity. Beyond business, Rudy was dedicated to the community of Milligan. He served on the school board, as a chaplain for the American Legion Post 240, participated in town parades, and served as a volunteer fireman. Both Rudy and Betty were long-time faithful members of the United Methodist Church. In 1968 Rudy moved his family to Kearney to take a position as a television technician for Sears. Five years later he was in a serious auto accident. Following a long recovery, Rudy and Betty, returned to Milligan and reopened Rudy’s Appliance as Golden Rule Gifts. For the next 20 years Rudy enjoyed his role as the “goodwill ambassador” for Golden Rule and the town. His smiling face was seen everyday for coffee break at Elaine’s, where he enjoyed the visiting as much as the coffee. Rudy was an avid reader, loved to fish, and hunt. He had a propensity for “inventing” and would often say, “Anyone can make something out of something, but if you make something out of nothing, then that’s really something!” He was passionate about the development of solar energy and heated a homemade greenhouse with water-filled milk jugs! Rudy never lost his interest in things or people. After becoming a resident of the Wilber Nursing Home in 2011, he quickly became known for his joyful disposition, an occasional spontaneous jig at the sound of polka music, and his love of Bingo and Dominos. Family and friends were often encouraged and admonished with the statement, “The most important thing is to love God.” He looked forward to meals and often frustrated the nursing home staff by visiting too much and eating to slow! Rudy was preceded in death by his parents, Rudolf and Rose Spousta and his brother Milo. He is survived by his wife, Betty Jean Spousta; daughter Linda Behrends and husband Howard of Diller, NE; son, Larry Spousta and his wife, Sue of Portland, OR; daughter Karen and husband Joel Harmon of Kearney, NE; seven grandchildren including Glenn Behrends, Carol Friesen, Steve Behrends, Matthew Spousta, Stacey Pfeifer, Jason Harmon, and Bryan Harmon; and thirteen great grandchildren. Rudy will be greatly missed. His wife will always cherish the 68 years they spent together, loving each other through the good and the difficult. His children will always remember his strength and integrity. His grandchildren and great grandchildren will always be blessed with the legacy of his deep love for God.

A Funeral service for Rudy will be 11:00 a.m. Tuesday, December 13, 2016, at the United Methodist Church in Milligan, Nebraska with Rev. Larry Spousta and Pastor Brad Barrows officiating. Visitation will begin Monday at 4:00 p.m. until 8:00... View Obituary & Service Information

The family of Rudy O. Spousta created this Life Tributes page to make it easy to share your memories.

Send flowers to the Spousta family.