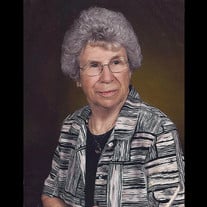 After 93 years of living fully, Ruth Maxine Whitten Meese Boswell died peacefully at Memorial Community Care in Aurora, NE, on September 14, 2017. She was born in Omaha, Nebraska, on July 23, 1924, the youngest child of Mildred Adelaide Dunton Whitten and Samuel Whitten, with sisters Helen, Jean, and Dorothy preceding her. She graduated from Omaha South High School in 1942 and then studied comptometers at business school. During World War II she decided to enter nursing school thru the U.S. Nurses Corps, graduating from Methodist Hospital School of Nursing in 1947. It was at Methodist Hospital where she met Lee David Meese, a young general practitioner finishing medical school. On July 29, 1949, they married and left Omaha for Hooper, Nebraska, where Dave started working with a local physician. In April 1950, they welcomed their daughter, Diane Louise Meese. They soon moved to Sutton, Nebraska, where Dave started his own general practice. Ruth stayed at home with Diane while also becoming an active member of the Federated Church in Sutton where she was able to use her musical skills singing and playing for others. After Dave unexpectedly died from polio in August 1952 at age 29, Ruth moved to the Meese family farm near Ithaca, Nebraska, to await the birth of her and Dave's second daughter. Nancy Ellen Meese was born in January 1953, in Omaha, about five months after her father's death. Ruth spent the next seven years on her own, moving back to Sutton and working at Mary Lanning Hospital in the surgery department- her favorite. She was blessed with many friends who helped with taking care of the two girls when she was working or on call for surgery. Ruth and the girls loved their little brick house! After marrying Gerald E. Boswell in Sutton on February 14, 1960, Ruth became a mother to two young boys- Larry Eugene Boswell (11) and Kenneth Lee Boswell (8). Jerry and Ruth settled on a farm northeast of Shickley, where she became a farmwife (with much teaching from Virginia Hopken) and helped Jerry with the livestock and farming. Ruth also occasionally worked at Fillmore County Hospital, assisting in surgery. Patricia Kay Boswell joined the family in March 1963, followed by Beth Ann Boswell in March 1966. After the three older children were off to college, Ruth and Jerry purchased the Ludwig farm southwest of Shickley in. 1971. This became their home where family gathered and memories were made- even when Jerry died from cancer on January 24, 1992, at age 68. Ruth continued to live on the farm independently until 2001, when she purchased a home in Shickley. She adjusted quickly to town life, enjoying walking, exercising, meeting with friends, traveling and attending church and school activities. Visiting her large family was something she loved to do, as well as attending her grandchildren's activities. Ruth's eyesight began to fail as she suffered from macular degeneration and she eventually stopped driving. Her social life continued, though, with the help of her many friends and drivers! Shortly before Ruth's 90th birthday, she decided to move to assisted living in Aurora, Nebraska. She enjoyed her life and new friends at East Park Villa until October 2016, when her health made it necessary for her to move to skilled care at Memorial Community Care. Throughout her entire life, Ruth always loved being with family, enjoying music, watching sporting events, and eating chocolate - and not always in that exact order! Ruth always was smiling (except when disciplining her children or watching Nebraska lose to Oklahoma), and turned into the quintessential sweet little old lady. The family is extremely grateful to Ruth's friends in Shickley and friends and caregivers in Aurora who made her life that much more wonderful in her final years on earth. Ruth was an independent woman in the 1950s long before "independent woman" became a catch phrase. She insisted all of her children be able to support themselves in life; just as she was able to support herself and her family when she was widowed at a young age. Ruth was preceded in death by her parents; sisters Helen James and Jean Morris; husbands Dave Meese and Jerry Boswell; daughter Diane Girmus and former son-in-law Johnnie Dale Girmus. She is survived by her sister Dorothy Meyer (Cincinnati OH); children Larry and Kate Boswell (Allen NE), Ken and Leslie Boswell (Shickley NE), Nancy and Leon Teetor (Ithaca NE), Patty and John Burke (Lexington KY), and Beth and Scott Johnson (Aurora NE); former daughter-in-law Kathy Boswell; grandchildren Lanny and Beth Boswell, Kelly Boswell and Beth Matschullat, Jason and Michelle Girmus, Kristin Girmus, Tara Girmus, Karen and Brian Labenz, Kendra and Dan Heath, Kristi Boswell, Mark and Sara Teetor, Becky and Andy Unterseher, Caleb Burke, Levi Burke, Samuel Johnson, and Alex Johnson; 24 great­ grandchildren; and many nieces, nephews, close relatives, and friends. Ruth chose to have her body cremated. Her ashes will be laid to rest next to her second husband, Jerry, and his first wife, Betty Gowen Boswell, at the Ong Cemetery in Ong, Nebraska. A generation has now passed in our family. We continue to live our lives in honor of our moms (Ruth and Betty) and dads (Jerry and Dave) and thank them for the gift of life. We extend our thanks to our family and friends for the many kind words, cards, flowers, thoughts and prayers for our mother, Ruth. A Memorial Service for Ruth was held on Saturday, September 23, 2017 at 10:00 a.m. at the United Methodist Church in Shickley, Nebraska. Pastor Martin Leeper officiated the service. Stanley Johnson accompanied the congregation in the singing of “Hymn Of Promise,” John Boswell sang “The Lord’s Prayer” during the service, and a recorded selection of “23rd Psalm” was played as a recessional song. Inurnment was held in the Ong Cemetery following the Memorial Service. Farmer & Son Funeral Home conducted the services. Online condolences may be left at www.farmerandsonfuneralhome.com. Memorials are suggested to the Shickley United Methodist Church.

The family of Ruth M. Boswell created this Life Tributes page to make it easy to share your memories.

Send flowers to the Boswell family.