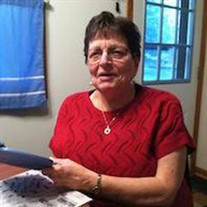 Ruth Ann Conner Ekeler was born on April 4, 1943 in Omaha, NE. In September of 1949, she and her sister Faye were adopted by Virgil and Esther Conner of Friend. She passed away March 4, 2014 at the age of 70 years and 11 months at St. Elizabeth Hospital in Lincoln surrounded by all eight of her children and their spouses, many of her grandchildren, her sister Faye, and several other family members. After being adopted by Virgil and Esther Conner, Ruth attended Friend Public Schools. After her graduation in 1961, she attended St. Elizabeth School of Nursing in Lincoln. She graduated and became a Registered Nurse in 1964. Ruth married Wilfrid Ekeler of Exeter on August 26, 1966. To this union, eight children were born: Michael, Gregory, Estelle, Jennifer, Catherine, Elizabeth, and twins, Monika and Mary. Ruth was called to nursing from an early age and after her graduation from St. E's, worked as a nurse for 44 years. Ruth's workplaces included St. Elizabeth Hospital in Lincoln, Warren Memorial Hospital in Friend, Rivendell in Seward, Henderson Care Center, and Exeter Care Center. Ruth was an inspiration to many in the nursing profession and the relationships she had with the many people she worked with over the years were very important to her. She retired from nursing in 2008. Ruth was a member of St. Stephen's Parish in Exeter for 48 years. Throughout her years there, she served on the St. Stephen's Altar Society and played the organ. In her early years, Ruth enjoyed sewing of all kinds and made most of the clothing for her three oldest children as well as Halloween costumes, including the famous tiger costumes that have been worn now by two generations. Ruth and her husband Willy loved attending sporting and school events for their children as they were growing up. Ruth spent countless hours on the bleachers at the Exeter High School gymnasium and in her lawn chair at track meets and at the baseball/softball fields. She kept stats at every event. Ruth was an avid cook and was especially known for her award-winning gravy. Some of her other specialties included roast beef, mashed potatoes, beef and noodles, chicken soup, goulash, breakfast casseroles, coffee cake, and macaroni and cheese. Ruth was preceded in death by her husband Willy, her father Virgil Conner, her step-father Joe Deterding, her brothers-in-law Wally “Gator” Neemann and Dwight Doran, nieces Geri Doran Yanes and Lori Neemann Becker, nephew Frank Doran, and brother Ray Snell. Ruth is surived by her eight children, sons Mike and Kris Ekeler of Geneva, Greg Ekeler of Exeter, Daughters Estelle and Ted DeJonge of Roca, Jennifer of Lincoln, Cathy of Lincoln, Liz and Dan Kallhoff of Exeter, Monika Ekeler of Lincoln, and Mary Ekeler of Exeter, 10 grandchildren, Matt and Susan Ekeler of Geneva, Nicole Ekeler and Christian Haumont of Geneva, Zach Ekeler of Fremont, Kevin, Kelsey, and Kaleb DeJonge of Roca, and Troy, Brett, Wilfrid, and Thomas Kallhoff of Exeter, and one great grandchild, Hailey Ekeler of Geneva. She is also survived by her sister and best friend Faye Neemann of Exeter, her mother Esther Deterding of Exeter, sister Ernestine and Gene Felton of Longview, WA, brothers Miles “Dick” Snell of Kenmore, WA, Jay and Jo Woodward of Omaha, Bob and Marty Mitchell of Edison, Dale and Kay Miller of Peoria, AZ, and Ron Hughes and Sheri Harig of Lincoln and many cousins, nieces, nephews, and friends. Funeral Mass for Ruth will be 10:00 a.m. Monday, March 10, 2014, at the St. Stephen's Catholic Church in Exeter, Nebraska. Visitation will begin Sunday from 1:00 p.m. until 5:00 p.m. at the Farmer Funeral Home in Exeter. Rosary will be 7:00 p.m. Sunday a the St. Stephens Catholic Church. Interment will be in the Exeter Cemetery. Memorials are directed to the Willy and Ruth Memorial Scholarship in lieu of flowers.

Ruth Ann Conner Ekeler was born on April 4, 1943 in Omaha, NE. In September of 1949, she and her sister Faye were adopted by Virgil and Esther Conner of Friend. She passed away March 4, 2014 at the age of 70 years and 11 months at St. Elizabeth... View Obituary & Service Information

The family of Ruth Ann Ekeler created this Life Tributes page to make it easy to share your memories.

Send flowers to the Ekeler family.