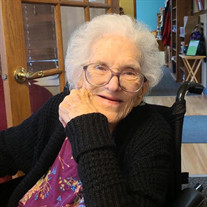 A Funeral Service for Ruth will be held on Tuesday, April 26, 2022 at 10:30 a.m. at the Fairmont Community Church in Fairmont, Nebraska. Pastor Monica Magoola will preside over the Funeral Service. A Graveside Service will be held at Blue Mound Cemetery in Milford, Nebraska at 1:30 p.m. on Tuesday, April 26, 2022. Public Visitation will be held on Monday, April 25, 2022 from 1:00 p.m. to 8:00 p.m. with family present from 5:00 p.m. to 7:00 p.m. at Farmer & Son Funeral Home in Geneva, Nebraska. Memorials are suggested to the Fairmont Community Church. Ruth's Funeral Service will be live-streamed to our public Facebook page. You can find our page by searching @friendlyfuneraldirectors or searching for Farmer & Son Funeral Home Facebook. Ruth E. Jantzi was born to George & Theresa (Walker) Holtz on August 18, 1932 at Kalamazoo, Michigan and passed away on April 21, 2022 at Fairview Manor in Fairmont, Nebraska at the age of 89 years, 8 months, and 3 days. She was one of four children born in the family. Ruth was married to Roman Jantzi Jr. of Colorado Springs on October 31, 1951. They made their life in Milford, Nebraska raising their family of 7 children. Ruth helped support the family by working for many years at the Nursing Home in Milford in the housekeeping department. Roman passed away in 1994 and Ruth moved to Fairmont, Nebraska to be closer to family. Ruth led an active life in Fairmont. She worked at the Fairmont Senior Center, participated in the Legion Auxiliary, and was a member of the Fairmont Community Church. She particularly enjoyed singing at Church, and she made singing a part of her daily routine. Ruth had a strong love for animals. Her dog, Frosty, was her greatest companion. In her early years, she had show rabbits and she won many ribbons at local and state fairs. She also enjoyed gardening, flowers, puzzles and Husker sports. Her grandchildren were especially important to her and they would often gather at her house to bake, sew, color and just spend time. She was a great companion for the grandkids and would do any activity they wanted from building tents to playing ball. Her attention was devoted to them. Ruth was a lady of few words, but her smile could light up the room. She never complained or asked for much, but instead chose to be positive and upbeat to those around her. Her calm presence will be missed by her family. Ruth was preceded in death by her parents; husband Roman Jantzi, Jr.; sister Ila Kimes; brothers Bob Holtz and Perry Holtz; daughters Jane Jantzi and Janna Roth; brother-in-law Richard Jantzi; and sister-in-law Suzanne Stutzman. She is survived by her sons Jerry & Sherry Jantzi of Fairmont, Nebraska and Terry & Linnette Jantzi of Denver, Colorado; daughters Sharon & David Newton of Visalia, California and Sandra Humke of Phoenix, Arizona; brothers-in-law Les & Jan Stutzman of Sun City, Arizona and Ronald & Julie Jantzi of Phoenix, Arizona; sister-in-law Karen Jantzi of Fairmont, Nebraska; grandchildren Terry & Hilary Jantzi, Brandon Jantzi, Joey Jantzi, Dawn & Craig Theis, Jody & Dustin Friesen, Jenni & Jeff Olson, Douglas & Hillary Betka, Curtis & Kristina Betka, Randa Jantzi & Shane Schneider, Cynthia Delgado, Chantelle Knight; 30 great grandchildren; and many nieces and nephews.

A Funeral Service for Ruth will be held on Tuesday, April 26, 2022 at 10:30 a.m. at the Fairmont Community Church in Fairmont, Nebraska. Pastor Monica Magoola will preside over the Funeral Service. A Graveside Service will be held at Blue... View Obituary & Service Information

The family of Ruth E. Jantzi created this Life Tributes page to make it easy to share your memories.

A Funeral Service for Ruth will be held on Tuesday, April 26,...

Send flowers to the Jantzi family.