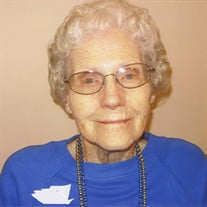 Ruth Rosalie Johnson was born July 25, 1918, to John Frederick Johnson and Helen (Linville) Johnson at Shickley, Nebraska and passed away October 3, 2015 at Heritage Crossings in Geneva, Nebraska at the age of 97 years. Ruth was one of six children in the family. Ruth grew up in Shickley, attending Shickley Public School and graduating with the class of 1935. Ruth helped out at her uncle Lee Linville’s home doing housework and farm chores until his death in 1971. Taking the advice of friends, Ruth took a one-year course in nursing and graduated from Platte College in Columbus receiving her LPN License in 1973 at the age of 55. She was employed with the Fillmore County Hospital and Long Term Care for many years, enjoying every minute of it. She made many friends at work including nurses, patients and residents. She always had a smile on her face and called everyone honey. After retiring Ruth took care of her mother at home. She enjoyed gardening and watching her grand nieces and nephews grow up. Ruth also worked with the Foster Grandparents Program going to Shickley Grade School, reading to the kids and having them read to her. She continued this when she moved to Heritage Crossings in Geneva, December of 2009 with Grace Lutheran School. Ruth was a volunteer at Heritage and Long Term Care helping with bingo and playing the piano. When she moved into Heritage she would play the prelude music for the Sunday afternoon worship service. Almost every morning you would hear her down in the Multi-Purpose Room “practicing.” Ruth was committed to her church and its activities taking pleasure in its works and endeavors. Ruth was preceded in death by her parents John and Helen, sister Josephine B. Billerbek, brother Gordon Lee and brothers-in-law Chan Kintner and Don Curren. She is survived by her sisters Grace Kintner and Dora Curren, brother Joseph Johnson and wife Betty, sister-in-law Delores Johnson, nieces and nephews Claire Wiseman (Jim), Britt Kintner (Joyce), Bruce Kintner (Pam), Fred Kintner (Sheila), Katie Curren, Mary Ann Bulander (Wayne), Kevin Johnson (Heather), Luanne Stordahl (Michael), Karen Reeb (Richard), Diane Deepe, Robert Deepe (Sharon) Dennis Deepe, David Deepe (Sue), 21 grand nieces and nephews and 19 great grand nieces and nephews. Memorial service for Ruth will be 10:00 a.m. Friday, October 16, 2015, at the United Methodist Church in Shickley, Nebraska. Committal of ashes will be follow at the Shickley Public Cemetery. Memorials are directed to the United Methodist Church.

Ruth Rosalie Johnson was born July 25, 1918, to John Frederick Johnson and Helen (Linville) Johnson at Shickley, Nebraska and passed away October 3, 2015 at Heritage Crossings in Geneva, Nebraska at the age of 97 years. Ruth was one of six... View Obituary & Service Information

The family of Ruth R. Johnson created this Life Tributes page to make it easy to share your memories.