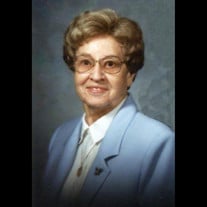 Ruth Ann (Sweney) Maresh was born to David and Eva (Baker) Sweney on September 30th, 1924 on a farm near Ohiowa, Nebraska and passed away September 27th, 2017 at Tabitha Care Center in Crete, Nebraska at the age of 92 years, 11 months, and 28 days. She was one of four children in the family. Ruth attended rural school near Ohiowa, later attending and graduating from Ohiowa High School. Ruth taught tap dancing to children at Ohiowa and Milligan, Nebraska. On May 24th, 1942, she married Richard H. Maresh of Milligan, Nebraska, and to them three children were born. During World War 2, Ruth and daughter Dixie Ruth Ann resided with her parents while Richard was stationed overseas. After the war, they farmed near Ohiowa, later farming near Milligan, Nebraska. Ruth worked as a receptionist at the Nebraska Girls Training School (YRTC) for ten years. Ruth was also involved in activities at Milligan and Geneva Methodist Churches, and her daughters' school activities. Later she obtained a realtor's license, and sold real estate. Richard campaigned for and won the position of Senator of the Nebraska Legislature 32nd District in 1970. He served in the Legislature for ten years. During campaigns and service to the Legislature, Ruth was his "right hand man." They enjoyed their service to Nebraska. Ruth was proud of her husband and his accomplishments, always keeping him in the spotlight. Ruth and Richard enjoyed traveling to see family and participated in an exchange program, Friendship Force, with a family in England. They also served on the Fillmore County Fair Board and Nebraska State Fair Board. Ruth recently received a lifetime pass to the Nebraska State Fair. Ruth Ann Maresh was preceded in death by her husband Richard; her parents David and Eva Sweney; her siblings, Mildred Sweney Huffman, William Sinclair Sweney, and Bonnie Sweney Casten and their spouses. Ruth is survived by her daughter Dixie Ruthann (Gene) Placek of Crete, Nebraska, Janet Maresh of Cleveland, Ohio, and Chere (Thomas) Woodey of Geneva, Nebraska; nine grandchildren and one step grandchild, fourteen great grandchildren and two step great grandchildren, and one great great grandchild; nieces and nephews. A Memorial Service for Ruth was held on Saturday, September 30, 2017 at 11:00 a.m. at the United Methodist Church in Geneva. Pastors Michelle Gowin and Mike McMurtry officiated the service. Sondra Myers accompanied the congregation in the singing of “You Are My Sunshine” and “Hymn Of Promise.” The recorded selections “Wind Beneath My Wings” and “Will The Circle Be Unbroken were also played during the service. Honorary pallbearers for the service included Sonja Akeson, Gina Henrickson, Jaime Placek, Joel Placek, Erika Biedron, Elizabeth DeFlyer, David DeFlyer, Tacy Baltz, Mary Uldrich, and Lisa Rody. Private Family interment was held in the Bohemian National Cemetery in Milligan prior to the Memorial Service. Farmer & Son Funeral Home conducted the services. Online condolences can be left at www.farmerandsonfuneralhome.com Memorials are directed to the Geneva Methodist Church, Geneva, Nebraska and Tabitha Hospice, Crete, Nebraska.

Ruth Ann (Sweney) Maresh was born to David and Eva (Baker) Sweney on September 30th, 1924 on a farm near Ohiowa, Nebraska and passed away September 27th, 2017 at Tabitha Care Center in Crete, Nebraska at the age of 92 years, 11 months, and... View Obituary & Service Information

The family of Ruth Ann Maresh created this Life Tributes page to make it easy to share your memories.

Send flowers to the Maresh family.