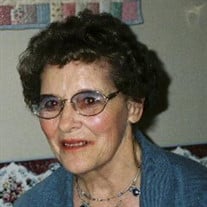 A Funeral Service for Ruth will be held on Thursday, March 8, 2018 at 11:00 a.m. at the Salem Mennonite Church with Pastor Shawn Nolt officiating. Visitation will be held on Wednesday, March 7, 2018 from 1:00 p.m. until 8:00 p.m. with the family present from 5:00 p.m. until 7:00 p.m. at Farmer & Son Funeral Home in Geneva. Graveside Services will be conducted following the funeral service in the Salem Mennonite Cemetery. Memorials are to be directed to the Salem Mennonite Church. Ruth Evelyn Schweitzer was called to her heavenly home on March 5, 2018 at Fairview Manor in Fairmont, NE at the age of 90 years, two months, and 15 days. She was born December 18, 1927 to Jacob and Lavina (Miller) Stauffer of Milford, Nebraska. She was the youngest of six children. She accepted Jesus as her savior in her youth and was baptized and became a member of the East Fairview Mennonite Church in Milford and later transferred her membership to the Salem Mennonite Church to which she remained faithful until death. In the spring of 1947 her parents retired from farming and she moved with them to town in Milford. She decided she would like to seek employment through the summer months so they were spent employed at the Singer Sewing Factory. Sewing soon became one of her favorite hobbies. She became a wonderful seamstress. Many beautiful dresses were produced in her sewing room. On October 5,1947 Ruth married Lyle Schweitzer of Geneva and moved to a farm near Martland. This was a big change for her as the home they moved to did not have many of the modern conveniences she was used to in Milford. She made the best of it and settled into the duties of being a farmer’s wife. They later moved to the Schweitzer farmstead where they farmed and raised livestock and then to their new home a mile south along the highway. On May 21,1957 their marriage was blessed by the birth of their son Bradley. This brought much happiness to their home. As the grandchildren arrived they were all very special as well and she loved singing to them at nap time as she rocked them to sleep. Great grandchildren received the same singing and rocking. She so enjoyed her time with them. All of God’s creation was special to Ruth. Sunsets, sunrises, trees and flowers did not go unappreciated or unnoticed. She was a wonderful gardener and loved taking care of her lawn, flowers, and garden. Ruth always had her canning room full of fruits and vegetables. She was a wonderful cook and holiday meals were always a treat. Her spiritual concern for her family was no secret and spoke often of her faith to us. The work of the church took priority. She taught Bible School and Sunday School. She also loved working on WMSC monthly projects and making quilts for the MCC Sale. Ruth felt the purpose of life was the growth of his kingdom and lived her life in that way. When most people would have retired Ruth moved to Geneva after Lyle went to the nursing home and started working at the Fillmore County Hospital. She loved her job there working in housekeeping and in the kitchen. She cherished the friends she made there and continued to work as long as she could. After she could no longer work Ruth would be found baking goodies and cake to be taken to Lyle in the nursing home and watching the great grandkids. Preceding her in death were her parents, husband, three brothers, and one sister. Ruth is survived by her son Brad and wife Sherrill, granddaughter Amanda Richards and husband Brent, granddaughter Cara Schweitzer, grandson William Schweitzer and wife Julia, great-grandchildren Reid and Lauren Richards and Bohannon Schweitzer, one sister, three sister-in-laws, one brother-in-law and many nieces, nephews, and friends.

The family of Ruth E. Schweitzer created this Life Tributes page to make it easy to share your memories.

A Funeral Service for Ruth will be held on Thursday, March 8,...