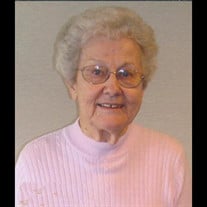 Funeral services for Ruth will be held on Tuesday, January 19, 2016 at 10:30 a.m. at Grace Lutheran Church in Geneva. The officiant for the service will be Pastor Wayne Oblender. Graveside services will follow the funeral and they will be held in the Geneva Public Cemetery. Visitation will be held on Monday from 2:00 p.m. to 8:00 p.m. at Farmer & Son Funeral Home in Geneva. Memorials are directed to the Grace Lutheran Church. Ruth Darline Engle Sorge was born to Constantine and Emma (Svehla) Engle on January 29, 1932 at their rural Fairmont farm. She joined her Heavenly Father on Friday, January 15, 2016 at Heritage Crossings in Geneva, NE with her loving family by her side at the age of 83 years, 11 months, and 15 days. She was one of eight children in the family. Ruth was baptized in Exeter on November 20, 1932 and was a member of the United Church of Christ in Geneva. Her family moved to a farm 3 ½ miles east of Geneva in 1932. Her oldest sister Eleanor remembers cutting Ruth’s hair with one snip, causing the back to be shorter than the front. Her younger sister, Mary, remembers being “watched” by Ruth as their mother did her daily chores. Their mother would always be asking “where is Mary at?” They both remember many dances at Buress, especially when Ruth asked for “Wooden Shoes” to be played instead of “Wooden Heart.” She attended District 68 east of Geneva through the eighth grade and graduated from Geneva High School with the Class of 1949. Following graduation Ruth worked for Banker’s Life in Lincoln for almost two years. She met the love of her life, Delbert Sorge of Geneva, at a Friday night football game in Geneva. He literally knocked her off her feet as she was on her way into the game. He was going out of the gate at half time and ran into her, causing her to fall to the ground. Upon helping her up, he asked her for a date. They were married May 25, 1952 at the United Church of Christ in Geneva. They held a wedding dance at Turkey Creek by Shickley. Ruth and Bert lived in Geneva their entire married life. To their union were born Danny Lee and Victoria Lynne. She instilled in them a strong faith in the Lord, to always do your best, and do what’s right. Ruth and Delbert also became Mom and Dad to Laura Herrera, a foreign exchange student from Mexico. She first worked at the ASC office in Geneva before going to work at the Geneva Public School as secretary to the Superintendent. Ruth then finished her working career at Cornerstone Bank. Ruth became a member of Grace Evangelical Lutheran Church, Geneva, through adult confirmation on October 28, 1956. She was a faithful member for 59 years. Ruth was a friend to all she met. She collected angels, which she was an angel to many. Her favorite pastimes were playing bridge and visiting with friends. She enjoyed working in her yard and never a week went by year round that you did not see clothes hanging on the clothesline. Ruth and Delbert belonged to the Geneva Curliques square dancing club. They also traveled south to visit their Texas cousins and Nebraska cousins who snow birded to Arizona. This led to many trips across various states. Ruth’s pride and joy was her family. She faithfully followed her children’s activities. Beginning in Ohiowa in 1977 and continuing in Shickley through 2014, a volleyball season did not go by that you did not see Ruth and Delbert in the stands for their son’s teams. They also went to many softball games through 25 years of their daughter playing for the Strang Ladies. Ruth then followed her grandson’s school activities attending many football, basketball, and baseball games. Ruth and Delbert took them on a summer vacation to Wyoming and Colorado, visiting places that they had vacationed with Dan and Vicki years before. She was proud of her grandsons and welcomed her “granddaughters” with love as they joined the family. Her family love extended further as her great-grandchildren were born. A smile came to her face every time they visited. Ruth belonged to the Geneva Women’s Club, the Fillmore County Hospital Auxiliary, and Grace Lutheran Ladies Aid. Following her heart surgery, she was a faithful member of the fitness center. She delivered Meals on Wheels and was active at the Geneva Senior Center. Trips on Wednesday and Saturday to Strang for her hair appointment included kolaches and coffee at Bubba’s Anytime. Almost every Friday night she would meet her girlfriends at the VFW for a drink and socializing, followed by supper with friends. Ruth and Delbert were blessed to celebrate 63 years together. On their 40th wedding anniversary they renewed their vows. On May 25, 2014 they were able to celebrate their 62nd anniversary with her remaining brothers and sisters. That was the last time the five remaining siblings were together. Ruth was preceded in death by her parents, Constantine & Emma Engle; parent’s-in-law Albert & Odessa Sorge; brothers George Engle, Sr., Frank Engle, Harold Engle, Willis Engle; sister Anna Vnoucek; sister-in-laws Phyllis Engle, Helen Engle, Beth Engle; and brother-in-laws Norman Sorge, Ronald Uldrich. She is survived by husband, Delbert Sorge, Geneva; son Dan Sorge, Strang; daughter Vicki Ozenbaugh, Ohiowa; sister & brother-in-law Eleanor & Arlan Becker, Exeter; sister Mary Uldrich, Milligan; brother-in-law Joe Vnoucek, Friend; sister-in-law Delores Spivey, Florida; grandsons Phillip (Nancy) Ozenbaugh, Hallam; Mitchell (Katrina) Ozenbaugh, Ohiowa; Russell (Krissy) Ozenbaugh, Strang; great-grandchildren Olivia, Trevor, Preston, Leah, Wyatt, Karolyn, Cynthia, Riggins, & Rustin; and many cousins, nieces, nephews, and friends.

Funeral services for Ruth will be held on Tuesday, January 19, 2016 at 10:30 a.m. at Grace Lutheran Church in Geneva. The officiant for the service will be Pastor Wayne Oblender. Graveside services will follow the funeral and they will be... View Obituary & Service Information

The family of Ruth D. Sorge created this Life Tributes page to make it easy to share your memories.

Funeral services for Ruth will be held on Tuesday, January 19,...

Send flowers to the Sorge family.