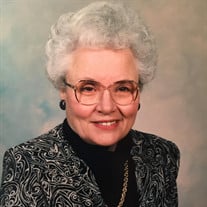 Ruth Louise Swanson, age 89, of Geneva, NE, passed away Friday, August 17, 2018 at Bryan West Hospital in Lincoln, NE. Ruth was born September 15, 1928 in Minden, NE, to Samuel and M. Louise (Gaudreault) Rolls. Ruth married Harry Wallace “Wally” Swanson on June 29, 1953 at St. Mary’s Catholic Church in Lincoln, NE. Wally died March 10, 1994. Ruth’s life was centered on her Catholic faith and was dedicated to the service of others at home and in the community. She grew up in Minden, NE, moving to Lincoln after High School and to Geneva when she married. She worked for the Telephone Company at the age of 15. Ruth worked for the Lincoln Chamber of Commerce and the Sower’s Club before taking a position for U.S. Senator Carl Curtis in Washington D.C. She was a member of St. Joseph’s Church in Geneva, serving as the church historian, and a member of the St. Joseph’s Altar Society, serving for a time as President. She served as President for the Lincoln Diocesan Council of Catholic Women, served the missions, food pantries, funeral dinners and was a member of the parish-quilting group. Ruth helped in the CCD program, led the rosary before Mass and was a reader at St. Joseph’s Catholic Church. Ruth also volunteered to deliver meals and was a member of the Geneva Mother’s Club, Kensington Club and served on the Library Board. She was an avid reader, student of history, and was a genealogist for both sides of her family. Ruth was an exceptional cook and kept alive the rich Swedish holiday food traditions. Ruth is survived by daughters, Christine (David) Ehrhart of Keller, TX, Cynthia (David) Lewis of Fort Lee, VA, Mary (Steve) Taylor of York, NE; sons, John (Deanna) Swanson of Doniphan, NE, David (Alicia) Swanson of Honolulu, HI; sister-in-law, Sandra Rolls of Sydney, NE, 16 grandchildren, 20 great grandchildren, and many nieces and nephews. She was preceded in death by her parents; husband Wally; sister Dorothy and brother Richard. A Funeral Mass was held on Wednesday, August 22, 2018, at 10:00 a.m., at St. Joseph Catholic Church with Father Harlan Waskowiak officiating and Father Joseph Walsh, Father Troy Schweiger, Father Matthew Rolling and Father Adam Sughroue as co-celebrants. Organist, Charlotte Bumgarner, accompanied the congregation as they sang, “Alleluia, Alleluia, Let The Holy Anthem Rise”, “Praise God, From Whom All Blessings Flow”, “I Am The Bread Of Life”, “Song Of Farewell” and “Oh God Beyond All Praising”. Pallbearers were Brian Ehrhart, Michael Ehrhart, Caleb Swanson, Jacob Swanson, Luke Taylor, Zach Taylor and Troy Taylor. Honorary pallbearers were Matthew Lewis and James Lewis. Graveside services were conducted following the Funeral Mass at the Geneva Public Cemetery. Memorials were directed to the family for a later designation.

The family of Ruth Louise Swanson created this Life Tributes page to make it easy to share your memories.

Send flowers to the Swanson family.