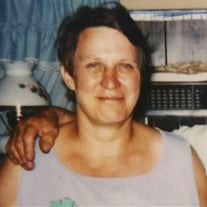 The family of Ruth Ann Trautman Vodicka created this Life Tributes page to make it easy to share your memories.

A public graveside committal of ashes will take place on Friday,...