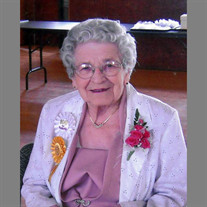 Funeral services for Sadie will be held on Wednesday, December 30, 2015 at 10:00 a.m. at the St. John's Lutheran Church in Ohiowa. Pastor Becky Sells will officiate the service. Graveside services will be held in Ohiowa Public Cemetery following the funeral service. Visitation will be on Tuesday from 1:00 p.m to 8:00 p.m. at the Farmer & Son Funeral Home in Geneva. Memorials are directed to the St. John's Lutheran Church. Sadie (Nedza) Wedeking was born near Wilber, Nebraska on April 11, 1911. She was the fifth child of Charlie and Anastasia (Prachar) Nedza. She was baptized at St. Wenceslaus Catholic Church in Wilber, Nebraska on June 4, 1911. Later, her parents moved to a farm southwest of Tobias. Sadie attended rural school District #41 (Sunnyside) which was a mile and a half walk to and from school. She graduated from Tobias High School in 1929. She continued education at Peru State. Sadie taught school for four years at Districts #29, 73, and 10, all in Fillmore County. Her first wages were $80.00. Once the Great Depression came, her wages went down to $40.00 a month. Sadie met Fred Wedeking at a dance in Tobias. After five years courting, they were married May 29, 1934 at the Fairbury Courthouse. Sadie was confirmed at Grace Lutheran Church south of Ohiowa on April 6, 1941 (Palm Sunday) by Rev. V.R. Pietzko. Sadie and Fred lived on the Wedeking home place southeast of Ohiowa for 13 years. They then moved to a place 1-mile north and ½ mile west where they built a new house, living there until 1961. They then built a new home in Geneva, Nebraska. Sadie was a typical farmer’s wife helping out when and however she could. After moving to Geneva, she worked six years at Holroyd Bakery and another six years in the laundry department of the Fillmore County Hospital. After the death of Fred, she worked at the Geneva Laundry Mat. Sadie belonged to the Extension Club in their neighborhood, which she enjoyed. She also enjoyed bowling and was on a bowling league for many years. She wouldn’t turn down a day at the casino and she loved to play cards. She just enjoyed life in general—always ready with a good laugh. Fred and Sadie had no children, but all her nieces, nephews and their families and their friend’s children were special to them. Sadie and Fred were members of the Grace Lutheran Church rural Ohiowa from 1934 to 1954. They joined St. John’s Lutheran Church in Ohiowa in 1954. Sadie and Fred were members of the Couple’s Club at church and Sadie was also a member of the Women’s Group at St. John’s. Sadie remained a faithful member of St. John’s and was the oldest member at the time of her passing. Sadie was preceded in death by her husband Fred; parents Charlie and Anastasia; sisters Elizabeth Nun, Lydia Nun, Rose Swab; brother Joseph Nedza, Charlie Nedza and Henry Nedza. She is survived by her sister Bessie Wulf of Ohiowa, Nebraska; nieces and nephews, great nieces and nephews, and great-great nieces and nephews and many friends.

Funeral services for Sadie will be held on Wednesday, December 30, 2015 at 10:00 a.m. at the St. John's Lutheran Church in Ohiowa. Pastor Becky Sells will officiate the service. Graveside services will be held in Ohiowa Public Cemetery following... View Obituary & Service Information

The family of Sadie Wedeking created this Life Tributes page to make it easy to share your memories.

Funeral services for Sadie will be held on Wednesday, December...

Send flowers to the Wedeking family.