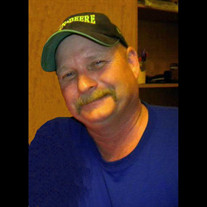 Samuel Earl Hogue was born on September 24, 1958 in York, Nebraska, to Robert & Luella (Huntley) Hogue. He passed away at his home in Geneva, Nebraska on January 12, 2017 from pancreatic cancer. He was one of 5 children born in the family. He lived in Geneva his entire life. Sam married Shelley (Betka) Hogue in 1987. With this marriage, Sam raised her son, Brian, as his own. Later on, Sam and Shelley had two daughters, Mariah and Demi. Sam graduated from Geneva High School and worked construction until he decided to follow his grandpa Earl Hogue, and he began working for the Fillmore County Road’s Department. Sam was employed there for 30 years until illness forced him to retire. Sam had a good sense of humor and he was friends with everyone. He also stayed in contact with his school classmates. He would watch Husker games with his best friend, Dale Turner, and he also enjoyed helping the Turner’s with their demo cars. Sam met the love of his life, Brenda Rowland, in 2011. They had a lot of fun together. She was his rock and caregiver ever since he became ill. Without the love and tender care of his family and friends, he would have given up a while ago. Sam was preceded in death by parents Bob & Luella Hogue; grandparents Earl & Edith Hogue and Sam & Ruth Huntley; sister Patty Hogue; nephew Brian Fikar; brothers-in-law Dale Mason and Chuck Hulse; and several aunts, uncles, and cousins. Sam is survived by his fiancé, Brenda Rowland and her 5 children; daughters Mariah and Demi Hogue of Lincoln, Nebraska; step-son Brian Delgado/Hogue and his wife Nicole of Hastings, Nebraska and their three children; sisters Connie Hoagland and husband Galen of Harvard, Nebraska, Sandi Mewhirter and husband Jim of Geneva, Nebraska, and Ruthie Keenan of Lincoln, Nebraska; and by nephews, nieces and other family members. Funeral services for Sam were held on Wednesday, January 18, 2017 at 10:30 a.m. at the United Methodist Church in Geneva. Pastor Michelle Gowin officiated the service. Recorded selections “Because You Loved Me,” “Amazing Grace,” and “Angels Among Us” were played during the service. Pallbearers for the service included Brian Delgado, Brian “Stub” Moor, Brant Schwisow, Andrew Colson, Josh Turner, and Shad Turner. Honorary bearers were Brad Hulse, Cory Hulse, Brent Hulse, Kirk Fikar, Chad Fikar, Travis Mason, Dale Turner, and Dennis Johnson. Interment was held in the Geneva Public Cemetery following the funeral service. Memorials are directed to the Geneva VFW Post 7102. Farmer & Son Funeral Home conducted the services. Online condolences may be left at www.farmerandsonfuneralhome.com

Samuel Earl Hogue was born on September 24, 1958 in York, Nebraska, to Robert & Luella (Huntley) Hogue. He passed away at his home in Geneva, Nebraska on January 12, 2017 from pancreatic cancer. He was one of 5 children born in the family.... View Obituary & Service Information

The family of Samuel E. "Sam" Hogue created this Life Tributes page to make it easy to share your memories.

Send flowers to the Hogue family.