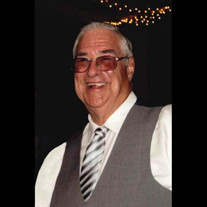 Samuel Anthony Pendleton was born October 8, 1959 to Samuel Howard Pendleton and Rose (George) Pendleton in Cherokee, Iowa, the oldest of six children, and passed away February 26, 2021 at BryanLGH East Hospital in Lincoln, Nebraska at the age of 61 years, 4 months, and 18 days. Sam attended parochial schools in Lincoln & Geneva. He finished his education at Willow High School in Quimby, Iowa graduating with the class of 1978. Following graduation, he followed in his father’s footsteps and began working for Harvestore, which also brought him back to Geneva, Nebraska where he lived the rest of his life. Here he met and was married to LaDonna Faye Rippe of Ohiowa, Nebraska on July 6, 1985, and to them two children were born, Samuel Wesley and Courtney Renae. Sam loved working on those blue silos. For him it was not a job, it was part of who he was. He started as an entry level serviceman and through his 43 years of service worked up to being the General Manager for Nebraska Harvestore. With the knowledge he had obtained over the years he was often consulted by Harvestore owners across the nation to help solve issues they had. Sam was an individual who loved visiting & joking with people. He had a contagious smile & belly laugh. He also loved to play baseball. As an adult his love of baseball transitioned into coaching while Sammy was playing and then into umpiring. As an umpire, it was important to him that the youth understood the mechanics of the game and how to be safe while playing. He was always surprised and proud to receive cards after the season from parents who thanked him for his actions behind the plate. In addition to his love of umpiring he also enjoyed attending Husker baseball and football games with his family. When Sam wasn’t working on a Harvestore or attending a ball game, his favorite place to be when the weather was nice was in his boat with a fishing rod in his hand. If it wasn’t fishing weather, it was time to play pinochle. His brothers have often said he was an amazing player who could pull anything out of a hand of nothing! Sam loved to contribute in any way possible and help in his community. He was very active in the Fillmore Central FFA booster club where he took great pride in how the boosters were able to help the FFA kids. He was also active at Prince of Peace where he previously served as Council President and as a member of the Evangelism and Property committees. While he enjoyed helping on any committee he was on, his greatest enjoyment came from fellowship coffee each Sunday after church. Family was always the most important thing to Sam. While he was so excited to be a Dad, nothing compared to becoming Natalie’s Grandpa. He loved each moment he got to spend with her and was looking forward to the day he could take her for her first ice-cream cone. Sam was preceded in death by his parents and his father-in-law Wes Rippe. He is survived by his wife, LaDonna of Geneva; son & daughter-in-law Samuel Wesley & Danielle of Friend; daughter Courtney of Tulsa, Oklahoma; granddaughter Natalie Rose Pendleton; brothers Melvin (Catina) of Sterling, Colorado, Alan (Jessica) of Lincoln, Patrick (Sandi) of Center Point, Iowa, Kelly of Atlanta, Georgia, Michael of Anamosa, Iowa; mother-in-law Bonnie Rippe of Ohiowa; step-mother & husband Anita & Larry Tuttle of Spirt Lake, Iowa; brothers-in-law Craig (Kim) Rippe of Geneva, Leroy (Colleen) Rippe of Geneva; sisters-in-law Nancy (Ben) Pekar of York and Sandy (Rick) Bolejack of Tabor, Iowa; nieces, nephews, a host of extended family, friends, and his Harvestore co-workers and customers. A Memorial Service for Sam was held on Friday, March 5, 2021 at 11:00 a.m. at the Prince Of Peace Lutheran Church in Geneva, Nebraska. Vicar Tim Stacy officiated the Memorial Service. The recorded selections “Daddy’s Hands,” “Shall We Gather At The River,” and “The Old Rugged Cross” were played during the service. A Committal of Ashes will take place at a later date in the Geneva Public Cemetery. Farmer & Son Funeral Home was in care of the arrangements and online condolences can be left at www.farmerandsonfuneralhome.com Memorials are suggested to the family for future designation.

Samuel Anthony Pendleton was born October 8, 1959 to Samuel Howard Pendleton and Rose (George) Pendleton in Cherokee, Iowa, the oldest of six children, and passed away February 26, 2021 at BryanLGH East Hospital in Lincoln, Nebraska at the age... View Obituary & Service Information

The family of Samuel "Sam" A. Pendleton created this Life Tributes page to make it easy to share your memories.

Send flowers to the Pendleton family.