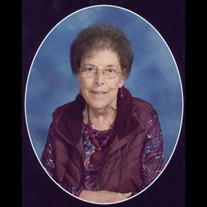 Sandra Lou (Gilg) Schafer-Nagy, the daughter of Louis and Mary Lou (Hollister) Gilg, was born October 6, 1943 in Bassett, Nebraska. She passed away peacefully on January 4, 2020 with family at her side at Salina Regional Health Center in Salina, Kansas, at the age of 76 years, 2 months, and 29 days. Sandra was a 1961 graduate of Rock County High School in Bassett, and she continued her education at Mary Lanning Hospital and Hastings College in Hastings, Nebraska where she earned her nursing degree. She dedicated her life to nursing, and spent the majority of her career at Mary Lanning Hospital in Hastings until her retirement. Sandra was married to Gaylord (Nellie) Schafer from 1973 until his death in 1998. On July 16, 2005, she married Herman Nagy who passed away in 2011. Sandy loved her family. She was proud of her children and always wanted the best for them. She was especially fond of her grandchildren and great grandchild, always looking forward to seeing them and sharing time together. They were the lights of her life. Sandra enjoyed a very active life. In earlier years, she enjoyed bowling with her friends and grandchildren, and spending time at the lake with her lake family. These past few years, she maintained a busy schedule playing bridge. She also spent numerous hours connecting with family, friends, former nursing colleagues, and high school classmates. Sandy was a member of the St. Mary’s Altar Society, the Shickley American Legion Auxiliary and she spent many hours as a volunteer for the American Red Cross, coordinating the local blood drives and teaching CPR. Sandra was preceded in death by her parents; first husband Gaylord Schafer and second husband Herman Nagy. She is survived by her two children, Kris Benson of McPherson, KS, and Jason Schafer (Trish) of Bethlehem, PA; grandchildren Jacob Benson, Katie (Kevin) Hewitt, Makenzie Benson, Zachary Schafer, and Reghan Schafer; great grandchild Benson James Hewitt; sisters Carol (Owen) Dutt, Florissant, MO and Jo (Doug) Durr, Salina, KS; son-in-law Bradley Benson, Salina, KS; and numerous nieces and nephews. A Funeral Mass for Sandra was held on Wednesday, January 8, 2020 at 10:00 a.m. at St. Mary Catholic Church in Shickley, Nebraska. Father Harlan Waskowiak officiated the Mass. Carol Grote accompanied the congregation in the singing of “On Eagles’ Wings,” “Be Not Afraid” “Away In A Manger,” and “Song Of Farewell.” She also accompanied the Gaspers Family Singers in the singing of “Walk In The World For Me.” Pallbearers for the service included Doug Durr, Dustin Durr, Brad Benson, Doug Gergen, Bill Grote, and Russ Reinsch. Honorary Bearers included Katie Hewitt, Kevin Hewitt, Makenzie Benson, Jacob Benson, Zachary Schafer, and Reghan Schafer. Interment was held in the St. Mary Catholic Cemetery. Farmer & Son Funeral Home was in care of the arrangements and online condolences can be left with www.farmerandsonfuneralhome.com Memorials are suggested to the Catholic Charities.

Sandra Lou (Gilg) Schafer-Nagy, the daughter of Louis and Mary Lou (Hollister) Gilg, was born October 6, 1943 in Bassett, Nebraska. She passed away peacefully on January 4, 2020 with family at her side at Salina Regional Health Center in... View Obituary & Service Information

The family of Sandra L. Schafer-Nagy created this Life Tributes page to make it easy to share your memories.

Sandra Lou (Gilg) Schafer-Nagy, the daughter of Louis and Mary...

Send flowers to the Schafer-Nagy family.