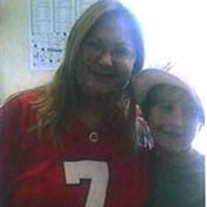 Sara Elizabeth Doremus Whitehead was born to Ronald W Doremus and Vicki S Richards Doremus on May 19, 1979 at Geneva, Nebraska and passed away February 29, 2012 at Geneva, Nebraska at the age of 32 years 9 months and 10 days. She was one of three children in the family. Sara lived in Geneva most of her life. She moved with her family to Monnet, Missouri for a short time then to Temple, Texas. In 1983 she moved back home to Geneva, Nebraska with her family. She attended Geneva Public School and graduated with the class of 1997. Sara enjoyed taking care of people all her life, which started when she was young babysitting. She continued her love of taking care of people when she was in high school by getting her CNA and CMA working at Fillmore County Hospital, Fairview Manor and Heritage Crossings. All of the residents were like her family and she loved them all. Due to health reasons she had to give that up and went back to school at Southeast Community College in Lincoln in Business Administration with an Accounting endorsement. She would have graduated in June of 2012. She helped her mother for the last three years with her tax business. This year she started working for Wilson Accounting which she was enjoying very much. Sara was married to Patrick L Whitehead of Geneva on August 30, 1998 and to them 1 child was born, Cody Ryan. Sara was baptized and confirmed in the First Congregational United Church of Christ in Geneva where she was active in Sunday School and Youth Group while in school. She currently enjoyed playing in the Bell Choir there. She was a Girl Scout for several years and really enjoyed competing with her sister, Jenny, to see who could sell the most cookies. (Mom usually tried to make a tie or as close as possible.) Sara loved gymnastics when she young and would watch the gymnastics in the Olympics and say “Someday I’m going to do that”. She played softball and enjoyed being the catcher for her team she also could play other positions. She loved to run for the school track team. Sara was a member of Job’s Daughters Bethel #79. Sara played the flute and piano for many years and played beautiful music. She was a member of the Geneva Rescue Squad for a short time but had difficult time because of her health issues. In Sara’s world, there was no such thing as a stranger she would strike up a conversation with anybody. She just loved people. Sara had a heart of gold and was always willing to drop everything to help a friend or acquaintance. She was always able to find good in everyone she met. She was a very loving mother to her son, Cody, and was very proud of him. She loved her niece, Andrea, and nephew, Ethan, very much. She would always talk about all three of them with everyone she knew. Family was very important to her. She enjoyed family reunions and getting to see everyone. Sara had a real love for music, laughter, family and friends. Here distinctive laugh and smile will be greatly missed by all who knew her. Sara will be greeted with open arms in heaven by her brother Jeremy Doremus, Grandparents Jesse and Kathleen Garrett Richards and J Walter and Marguerite Kennel Doremus, uncles Robert C Richards and Ronnie L Maynard, and many great aunts and uncles. She is survived by her son Cody Whitehead, parents Ronald & Vicki Doremus all of Geneva, sister and brother-in-law Jennifer and Adam Rasmussen, niece Andrea Rasmussen, nephew Ethan Rasmussen all of Lincoln. Ex-husband and friend Patrick L. Whitehead of York, NE. Aunts and Uncles Pete and Carole Saiser of Geneva, NE, Gary and Shelia Richards of Georgetown, TX, Mary Maynard of Layton, UT, Dwaine and Mary Willms of Fredrick, CO, Don and Ruby Doremus of Kearney, NE, Bob and Kay Betka, Keith and Pat Mathiesen all of Exeter, NE, great aunts and uncles, many cousins and a host of friends. Memorial services were held on Monday, March 5, 2012,at the First Congregational United Church of Christ with Pastors William Switzer and Lynn Strandt officiating. Jenny Eichelberger accompanied the congregation who sang “Some Glad Morning”, “This Is A Day Of New Beginnings” and “Amazing Grace.” A recorded selection by Taylor Swift “Tied Together With A Smile” was also played. Serving as honorary bearers were Sara’s family and friends. A private family committal was held in the Geneva Public Cemetery. Memorials are directed to an Educational Fund for Cody.

Sara Elizabeth Doremus Whitehead was born to Ronald W Doremus and Vicki S Richards Doremus on May 19, 1979 at Geneva, Nebraska and passed away February 29, 2012 at Geneva, Nebraska at the age of 32 years 9 months and 10 days. She was one of... View Obituary & Service Information

The family of Sara E. Whitehead created this Life Tributes page to make it easy to share your memories.

Send flowers to the Whitehead family.