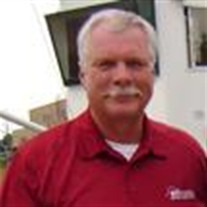 Scott Wayne Houck was born to Earl Wayne Houck and Patricia Ruth (Ohnesorge) Houck November 24, 1959 at York, Nebraska. This was Earl and Pat’s 10th wedding anniversary. He passed away May 30, 2016 at his home by Strang, Nebraska, surrounded by his family, at the age of 56 years, 6 months and 6 days. He was one of 3 children in the family. Scott attended Strang Public School through the 8th grade, then attended Bruning High School. After graduation in 1978, he attended Chadron State College for 2 years, playing football for the Eagles. He transferred to UNL and graduated in December of 1982 with a degree in Agronomy. In the summer months, he worked for Rollie Davis of Davis Agri Service in McCool Junction. Scott returned home after college to farm with his dad and also started his own business, Houck Agri Service. After his dad passed away in 1989, Scott assumed the responsibility of the farming operation. Scott served on Trinity Lutheran Church Council, Hamilton Township Board, Trinity Lutheran Cemetery Board, Nebraska Soybean Association, Nebraska Soybean Board, Tom Osborne Advisory Board, Strang School Board, President of the Strang CIP the last 3 years, and Bruning Grain and Feed Board. On February 18, 1989, Scott married Jody Christine Krupicka of Carleton, and to them two children, Ross and Taylor, were born. Scott was a lifetime member of Trinity Lutheran Church in Bruning. He was baptized at Trinity on December 20, 1959 and Confirmed on May 18, 1975. He was also a member of the Sons of the American Legion in Bruning, and the Fillmore County Legion Riders. Scott enjoyed playing softball, riding his motorcycle, driving with Jody in their Camaro, antique tractors, Royal’s baseball, Husker football, traveling-especially his trip to South America, and just like his dad, driving for hours. Many hours were spent working on his “man cave”. Taylor and Maggie recently put on the finishing touches, which he got to see. Scott is preceded in death by his father, Earl of Strang. He is survived by his wife Jody of Strang; son Ross (Morgan Monteforte) of Bruning and daughter Taylor (Dylan Lauenstein) of Strang; mother Patricia Houck Headrick and husband Allen of Geneva; sisters, Sondra (Delwin) Myers of Strang and Janelle (Doug) Bruning of Bruning; Father-in-law and Mother-in-law Larry and Laura Krupicka of Carleton; and sisters-in-law Susan (B. J.) Linton of Hebron and Nancy (Jeff) Krehnke of Bruning; nieces and nephews Michelle (Jason) Paulk and Maggie (Justin) Jiskra of Lincoln; Alicia (Jimmy) Chavez of Overland Park, KS, Andrea (Nathan) Seggerman of Omaha, Bailey, Brinley and Bridget Linton of Hebron and Trevor, Hunter and Chase Krehnke of Bruning. He is also survived by 4 great nieces, Emma and Ruby Jiskra, and Caitlin and Skylar Paulk, all of Lincoln and 2 great nephews, Daniel and Jacob Seggerman from Omaha, and “Bunches of” relatives and friends. A Memorial Service for Scott will be at 10:30 a.m. Friday, June 3, 2016 at the Trinity Lutheran Church in Bruning, Nebraska. Private Family committal of ashes will take place at the Harmony Cemetery, rural Strang, Nebraska following the service at the church Cremation has taken place so there will be no visitation. Memorials are directed to the family for later designation.

Scott Wayne Houck was born to Earl Wayne Houck and Patricia Ruth (Ohnesorge) Houck November 24, 1959 at York, Nebraska. This was Earl and Pat&#8217;s 10th wedding anniversary. He passed away May 30, 2016 at his home by Strang, Nebraska, surrounded... View Obituary & Service Information

The family of Scott W. Houck created this Life Tributes page to make it easy to share your memories.

Send flowers to the Houck family.