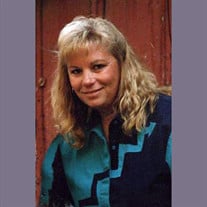 Funeral services for Shari will be held on Friday, December 5, 2014 at 10:00 a.m. at the St. John's Lutheran Church in Ohiowa, Nebraska. Pastor James Sells will officiate the service. Graveside services will follow the funeral in the Ohiowa Public Cemetery. Visitation will be on Thursday from 1:00 p.m. to 8:00 p.m. with family greeting friends form 6 - 8 p.m. at the Farmer & Son Funeral Home in Geneva. Memorials are directed to the Ohiowa Rescue Unit or the Geneva Rescue Unit. Shari Ann Westwood was born to Dale Arnold Schropfer and Leota Bertha Nelson on March 2, 1961 at Geneva, NE, and passed away on November 30, 2014 at Fillmore County Hospital in Geneva, NE at the age of 53 years, 8 months, 28 days. She was one of six children in the family. Shari graduated from Ohiowa High School. After high school, Shari married Dale Turner in Geneva on July 14, 1979. To this union two sons were born. On June 1, 2002, Shari married John Westwood in Milligan, NE. Shari started young at life by working hard to provide for her family by doing several jobs. Shari worked at Fillmore County Hospital from 1981-1987, from there, she went on to drive the school bus for Geneva Public Schools and cleaned houses. Shari took much pride in keeping her home, as well as many other homes in the community clean. Shari enjoyed getting the kids to and from school and their school events as their bus driver. After that, she worked at the Fillmore County Department of Roads where she operated heavy equipment and helped with the development of county roads and ditches. In 2000, Shari lived her dream of being a pen rider at Gottsch Feed Yard in Red Cloud, NE. She worked for five years before having the chance to pen ride at the prominent Cactus Feeders in Ulysses, KS. One of the duties she enjoyed the most at Cactus Feeders was helping doctor the animals. After Shari’s pen riding accident in 2005, Shari decided it was time to move back home to be closer to her family. In 2007, Shari went to work at Mid-America Feed Yard in Ohiowa, where she was currently a member of the field crew. Shari enjoyed her years as an EMT for the Geneva Volunteer Rescue Squad, volunteering her time for nearly 15 years. Shari also always enjoyed cheering her boys on with everything they did in life. Shari’s biggest treasures in her life were her two boys and her grandkids that she loved dearly. Family and friends were always high on her spectrum of life. Shari enjoyed her life with her husband John at their new home and porch on a farm in Ohiowa where she proudly raised her five horses, two dogs, and flowers. Shari was preceded in death by her parents, Dale A. Schropfer and Leota B. Nelson. She is survived by her husband John Westwood of Ohiowa; sons Josh (Valerie) Turner and Shad Turner all of Geneva; grandchildren, Jackson, Sarah, Zachary Turner and Emily Turner all of Geneva. Shari is also survived by her sisters, Kathy (Mike) Hudson of Belvidere, Judy (Louis) Schweer of Beatrice, Debbie (Bob) Theye of Geneva, Tammy Hoffman of Hebron, Janie Schropfer of Deshler; uncle Len Schropfer of Milligan; aunt Jean (Don) Molde of Reno, Nevada; and many nieces and nephews.

Funeral services for Shari will be held on Friday, December 5, 2014 at 10:00 a.m. at the St. John's Lutheran Church in Ohiowa, Nebraska. Pastor James Sells will officiate the service. Graveside services will follow the funeral in the Ohiowa... View Obituary & Service Information

The family of Shari A. Westwood created this Life Tributes page to make it easy to share your memories.

Funeral services for Shari will be held on Friday, December 5,...

Send flowers to the Westwood family.