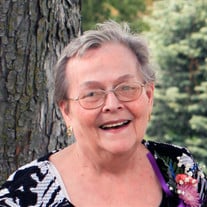 Funeral Services for Sharon will be held on Friday, September 9, 2016 at the United Methodist Church in Exeter, Nebraska at 10:30 a.m. with Kim Dunker officiating. Visitation will begin on Thursday, September 8, 2016 at 1:00 p.m. and conclude at 8:00 p.m. Sharon's family will be present from 5:00 p.m. until 7:00 p.m. at Farmer Funeral Home in Exeter, Nebraska. Graveside services will be held following the funeral service at the Exeter Cemetery in Exeter, Nebraska. Memorials are to be directed to the family for a later designation. Sharon was a Husker fan and wanted to have her funeral service Husker oriented, so the family asks that everyone that comes wear your Husker apparel to the service. Sharon Ann Miller, the daughter of John O. Miller and Melba Rose (Laufmann) Miller was born on March 15, 1944 in Friend, Nebraska and passed away on September 6, 2016 at St. Elizabeth Hospital in Lincoln, Nebraska at the age of 72 years – 5 months – and 22 days. She was united in marriage to Andrew Ring in 1969 and two daughters, Lisa Ann and Jackie Sue, were born to this union. Later the marriage was dissolved. In May of 1983 Sharon was married to Kenneth A. Harre. Ken had three children, Kenneth, Valerie and Lisa, and the two families were blended together. Ken passed away in 1996 and Sharon continued to live in the family home until she passed away. Sharon was confirmed into the Exeter Methodist Church in 1958 and has received her 50-year membership pin. She graduated from Exeter Public Schools in 1962, prior to her graduation from Exeter Public; she attended Country School for several years, which served the Exeter and Cordova communities. Sharon’s two daughters, her grandchildren and great-grandchildren were the most important part of her life. Some of her favorite pastimes were working crossword puzzles, solitaire on the computer, cheering on the Huskers, watching NASCAR and visiting with friends and family. Sharon was preceded in death by her parents, John and Melba (Laufmann) Miller and husband, Kenneth. She is survived by her children, Lisa Ring, Jackie Miller and husband, Joe, five grandchildren, and six great-grandchildren, three stepchildren, their children and grandchildren, brothers and sisters-in-law, John C. and Janice Miller and Alan and Cecilia Miller and many nieces, nephews and other relatives and friends.

Funeral Services for Sharon will be held on Friday, September 9, 2016 at the United Methodist Church in Exeter, Nebraska at 10:30 a.m. with Kim Dunker officiating. Visitation will begin on Thursday, September 8, 2016 at 1:00 p.m. and conclude... View Obituary & Service Information

The family of Sharon A. Harre created this Life Tributes page to make it easy to share your memories.

Funeral Services for Sharon will be held on Friday, September...

Send flowers to the Harre family.