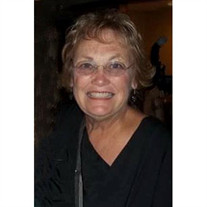 Sharon Kay Holtzen was born to Harley L. Gaston and Viola E. Schmidt Gaston on June 1st, 1949 in Fairbury, Nebraska and passed away August 31st, 2015 at the age of 66. Sharon graduated in 1967 from Fairbury High School. She was a jack of all trades with numerous jobs from sewing to making cakes to winding brooms to helping troubled youth to secretarial responsibilities- she could do it ALL. She left a lasting impression on anyone who crossed her path. Her contagious smile and enthusiasm for life was her personal signature. Although Sharon called a few other places home, her heart was in Bruning. She was an active member of the community and a die-hard fan of any school sport. Sharon had a lot of pride for Bruning and enjoyed her job as Village Clerk. She was always going above and beyond to make sure that the community was clean and welcoming to visitors and residents. Her pride was displayed especially during playoffs when she made the town’s streets her canvas, leaving inspiration for the entire team. She was all about “getting the party started”. Whether it would be around a fire pit, in the gymnasium, on a road trip, or over a drink; her energy was contagious. She loved bringing joy to others through surprises and embarrassment. She especially enjoyed Christmas celebrations - coming up with games that were meant not only to bring a smile to everyone’s face, but also to reflect in the gift of life. Her greatest pleasures in life were her four children, grandchildren, and youth of the community. Left to cherish her memory is her son Dustin Zabokrtsky and daughters Madison and Hailey of Bennington, Nebraska; daughter Kimberly Mussman and husband Chad Mussman and their children Cagney, Allison, and Barrett of Ohiowa, Nebraska; son Dalton Holtzen and wife Lary Holtzen of Fairbury, Nebraska; daughter Whitney Holtzen and fiancé Jason Garwood of Ames, Iowa; brother Dennis Gaston of Fairbury, Nebraska; sister Lorie Monroe of Lincoln, Nebraska; and sister-in-law Mary Jo Gaston of Fairbury, Nebraska. As well as nieces, nephews, friends, colleagues, and others she considered family. She was preceded in death by her parents, her sister Ardith Willcoxon, and her brother Vern Gaston. In January of 2013 Sharon started a journey in which she truly found her purpose in life. With a cancer diagnosis she utilized her faith and became an inspiration for others. She stayed strong and positive throughout her fight and hasn’t lost the battle… she has finally won. Funeral services for Sharon were held on Thursday, September 3, 2015 at 10:00 a.m. at the Trinity Lutheran Church in Bruning. Pastor Stuart Sell officiated the services. Melissa Houchin accompanied the congregation in the singing of “In The Garden” and “Amazing Grace.” She also accompanied Karie Buchli in the singing of “The Lord’s Prayer.” The recorded music of “I’ll Always Love You” by Whitney Houston was played at the end of the service. Pallbearers for the service included Leon Gaston, Jeffrey Gaston, Michael Gaston, Matt Buchli, Donnie Willcoxon, Rob Marsh, Ryan Monroe, and Matt Pittman. Honorary bearers were Barrett Mussman, Allison Mussman, Cagney Mussman, Madison Zabokrtsky, and Hailey Larsen. Interment was held in the Fairbury Cemetery. Memorials are directed to the CEDARS Youth Service, 6601 Pioneers BLVD #1, Lincoln, NE 68506. Farmer & Son Funeral Home of Geneva conducted the services.

Sharon Kay Holtzen was born to Harley L. Gaston and Viola E. Schmidt Gaston on June 1st, 1949 in Fairbury, Nebraska and passed away August 31st, 2015 at the age of 66. Sharon graduated in 1967 from Fairbury High School. She was a jack of all... View Obituary & Service Information

The family of Sharon K. Holtzen created this Life Tributes page to make it easy to share your memories.

Send flowers to the Holtzen family.