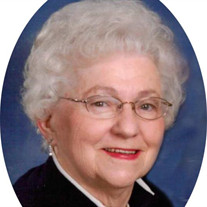 A Graveside Service will be held for Sharon on Friday, June 7, 2019, at the Geneva Public Cemetery at 2:00 p.m. with Pastor Doug Griger presiding. A Visitation will be held on Thursday, June 6, 2019, from 4:00 p.m. until 8:00 p.m. with the family present from 4:00 p.m. until 6:00 p.m. at Farmer & Son Funeral Home in Geneva, Nebraska. Following the Graveside Service for Sharon the family will have a gathering where friends and family are welcome to attend and share fellowship and stories of Sharon at the Geneva Log Cabin from 3:00 p.m. until 5:00 p.m. In lieu of flowers, donations may be made to Faith United Methodist Church, 300 9th Street NW, North Canton, OH 44720 or The National Pancreatic Cancer Foundation, P.O. Box 1848, Longmont, CO 80502. Sharon Kimbrough Minich Suderow – September 9, 1936 – May 22, 2019 Sharon passed away on May 22, 2019, in Canal Fulton, Ohio. She is survived by her husband, Ralph Suderow; her children Susan Minich Daniels, Cindy Minich Schrader, Laurie Minich Hofele (Joe), Kent Minch (Mary Laurens), Kathy Suderow, and Tim Suderow (Carol). She is also survived by her grandchildren, Grace Daniels, Adrianna Daniels, Brian George (Jenn), Spencer George, Mackenzie George, Kellie Minich, Caroline Minich, and Serenna Davis; her great-grandchildren Cashton George, Grayson George, and Madalynn George; her brother Dennis Kimbrough (Marilyn); and her nephews David Kimbrough and Tony Kimbrough. Sharon was preceded in death by her parents, Viola Kleinschmidt Kimbrough and Kenneth Kimbrough, her brother Rodney Kimbrough, her son Douglas Minich, and her former husband William Minich. Sharon was born in O’Neil, Nebraska and grew up on her family’s farm. She moved to Ohio in 1968, where she remained until her death. She married Ralph Suderow in 1996, and together they shared 23 years of steadfast love and friendship. Sharon was an active member of Faith United Methodist Church and especially treasured her time with her Saturday morning breakfast group. She enjoyed all kinds of crafts. A gifted candle maker, she loved sharing her art with others.

The family of Sharon Kay Suderow created this Life Tributes page to make it easy to share your memories.

A Graveside Service will be held for Sharon on Friday, June 7,...

Send flowers to the Suderow family.