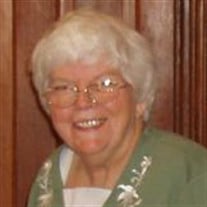 Funeral services for Sheila wil be held on Wednesday, June 3, 2015 at 10:00 a.m. at Stockholm Lutheran Church in Shickley. Pastor Jon Jensen will officiate the services. Graveside services will follow the funeral in the Swedish Cemetery. Visitation will begin on Tuesday from 2:00 p.m. to 8:00 p.m. with family present from 6:00 p.m. to 8:00 p.m. at the Farmer & Son Funeral Home in Geneva. Memorials are directed to the family. Sheila Loree Johnson was born on April 24, 1936 ,in York, Nebraska, to George and Mildred Johnson; she passed away on May 30,2015, in Lincoln, Nebraska, at the age of 79 years, 1 month, 6 days. Sheila attended York Public Schools, graduating in 1954. She then attended Kearney State College, finishing in 1956 with a two-year teaching certificate in elementary education. When the Superintendent of Schools in Grand Island came to the Kearney State campus to interview potential teachers, Sheila was advised to sign up because the interview would be tough and it would be good practice for her. Lo and behold, she came away from the interview with a job offer. Sheila taught two years in Grand Island, where she became lifelong friends with two other teachers who roomed at the same boarding house with her. She then transferred to York Public Schools to be nearer her family and for the opportunity to teach younger children. In 1960, Sheila married Albert LeeRoy Hendrickson and moved to Shickley, Nebraska. They began their life together on the Hendrickson homestead, which had been founded by LeeRoy's grandparents and great-grandparents. While she had been baptized into the Methodist faith, she went through adult confirmation at the church of LeeRoy's birth, Stockholm Lutheran, where she remained a steadfast member until its closure in 2005. She was also one of the church’s longest serving organists. Although she was a "city kid" by birth, Sheila helped with the farming operation from the very beginning of their marriage, whether it was selling eggs, helping move farm animals or driving grain trucks to the elevator. She remained active in farming even after her husband's death, doing bookkeeping chores right up until her recent hospitalization. On December 11, 1961, Sheila and LeeRoy had a son, Daniel Lee. Two years later, they had a daughter, Loree Patricia. Once her children were old enough for school, Sheila became a teacher's aide at Shickley Public Schools. During this time, she also attended night classes and summer school at the University of Nebraska in Lincoln so that she could complete her four-year degree and become recertified as an elementary teacher. Upon her graduation, Sheila accepted a job with the Strang Elementary School, teaching fifth-eighth grades. After several years, she moved to the Ong Elementary School for an opportunity to teach kindergarten through second grades, her favorite ages. Later, she team taught with another individual, handling the reading, music and other courses for the entire kindergarten through sixth grades. Sheila retired from teaching when the Ong School closed, having spent 19 years in the classroom. While she was no longer a practicing educator, she never lost her love for children, enjoying every single student, whether they were in the classroom, on the court or onstage. And right up until her death, she kept track of many of her former students and their children and could often name current students in the area, as well as their grade levels and recent accomplishments. Throughout her adult life, Sheila was active in the Stockholm Lutheran Church Fellowship and Ladies Aid groups; the Shickley Women's Club; Delta Kappa Gamma, an honorary society for teaching professionals; and most recently, she had joined the area chapter of the Daughters of the American Revolution with her daughter and granddaughter. She was also a founding member of Shickley's American Legion Auxiliary Unit #164, where she was serving as Chaplain at the time of her passing. Yet her first love was always children, as proven by the number of students who have stayed in touch with her over the years. Once when Sheila was taking some nieces and nephews on an educational trip to the Stuhr Museum, she was approached by a man who asked if she happened to be Miss Johnson. When she replied, "I used to be, he said that she'd been his third grade teacher and he'd always wanted to thank her. It seems he suffered from dyslexia before anyone even knew what a learning disability was and had been sliding through elementary school without learning to read. Sheila worked to get him caught up with his class, and consequently, he always remembered his third grade teacher. As for her own children and grandchildren, Sheila made a huge effort to not only attend every event in which they participated, but also to take an active interest in those activities. Dan remembers his mother scouring the newspaper for football statistics while Loree recalls the hours she spent in the library looking for college grants and scholarships. She would admire Amy's compassion while stockpiling art supplies to stimulate her creativity; she would cheer at Nathan's games and track meets while pouring over every story he was willing to share from English class; and she could tally Caleb's newspaper earnings while the two of them smiled over one of their private jokes. All three of her grandchildren can still picture her sitting front and center at anything they ever attempted, even after her health began to decline. Sheila is survived by her son, Daniel; his wife, Lisa; and their three children, Amy, Nathan and Caleb; her daughter, Loree; her brother, Ray Johnson, and wife, Pina; her sister-in-law, Euhla Sharp; and numerous nieces, nephews, great-nieces and great­ nephews. She is preceded in death by her husband, LeeRoy; her parents, George and Mildred Johnson; a brother, Dean Johnson; her parents-in-law, Albert and Lillie Hendrickson; brothers-in-law, Maurice Hendrickson, and wife, Joan; Richard Hendrickson; and William Sharp; sisters-in-law, Norma Hendrickson, Melba Replogle, and husband, Dell; and Zelpha Burbank, and husband, Randy; and numerous beloved aunts and uncles.

Funeral services for Sheila wil be held on Wednesday, June 3, 2015 at 10:00 a.m. at Stockholm Lutheran Church in Shickley. Pastor Jon Jensen will officiate the services. Graveside services will follow the funeral in the Swedish Cemetery.... View Obituary & Service Information

The family of Sheila L. Hendrickson created this Life Tributes page to make it easy to share your memories.

Funeral services for Sheila wil be held on Wednesday, June 3,...

Send flowers to the Hendrickson family.