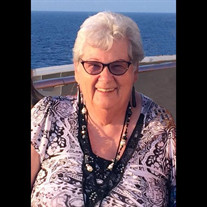 Shelia was born March 30, 1942 in Canton Illinois to Andrew Shumaker and Etta (Kramer) Shumaker. She passed away on Oct 13, 2017 at the Fillmore County Hospital at the age of 75 years, 6 months and 13 days. Shelia grew up in Illinois with her mother Etta, and siblings Larry, Kay, and Lewis (Lou) before moving to California as a young girl. She then moved back to Illinois in the late 1950s with her family. In Illinois, on a blind date, Shelia met Gary Richards (who was in the Navy at the time). They were joined in marriage on December 29, 1958. During their marriage Gary and Shelia were blessed with 5 children: Debbie, Steve, Brenda, Jeanette and Kelly and later raised their grandson Jesse. In 1967, Gary left the Navy. He and Shelia returned to Geneva with their family to pursue farming. While living on their farm in Geneva, Ne, Shelia enjoyed raising her children, tending to her garden, and helping run the farm. After the children had grown, she pursued her love of cooking while working at Geneva High School, Heritage of Geneva, and Hearthstone in York. Gary and Shelia resided in Geneva until 2009, when they retired to Georgetown, Texas. They enjoyed the MUCH warmer weather and a community they fell in love with. Gary and Shelia made many lasting friendships in a welcoming community that has become their Texas family. Gary and Shelia enjoyed returning to Geneva often to visit family, friends, and helping with harvest. They were in Geneva when Shelia passed away. Shelia belonged to the First Congregational United Church of Christ in Geneva for many years. During this time, she participated in women’s fellowship. After moving to Texas, Shelia remained involved in her faith and attended Hill Country Bible Church in Georgetown. She participated in bible study while attending this church. Shelia was a very creative woman. When her children were young, she would sew clothing for them. As the children grew so did her passion for creativity. Shelia enjoyed crocheting afghans, ceramics, beading and jewelry making, and many other crafts. Her latest project was crocheting hats for mission work. Shelia and Gary belonged to the Geneva Community Grange. She was also member of the Rebekah’s. Shelia enjoyed square dancing, playing cards and various board games as well as bowling, where she was on a league for many years. She was preceded in death by her parents Andrew and Etta; in-laws Jesse and Kathleen Richards; brother Lou; brother-in-law Robert Richards; son-in-law Dale Rice; twin granddaughters; grandson Jesse Richards; and one great-grandson. Shelia is survived by husband Gary; children: Debbie (Lonnie) Taylor of Fairmont, Steve (Jackie) Richards of Omaha, Brenda Richards of Lincoln, Jeanette (Scott) Yound of Grand Island, Kelly Hartman of York; Grandchildren: April (Mike) Faubion of Malcolm, Wade Taylor of York, Amy Richards of Chicago, IL, Bryan Richards of Omaha, John Kelch of Lincoln, Dr. Jennifer (Jeff) Yound-Lasker of Commerce City, CO, Nate (Talisha) Yound of Lincoln, Michael (Amy) Hartman of York, Amber (Byron) Wilson of York, Damien Hartman of York; 13 Great-grandchildren; brother Robert (Georgia) Shumaker of Spokane, Washington; and sister Kay Fiedler of Shakopee, Minnesota. A Memorial Service for Shelia was held on Wednesday, October 17, 2017 at 10:30 a.m. at the First United Congregational Church Of Christ in Geneva. Pastors Stuart Davis and Dennis Keller officiated the service. The recorded selections “Amazing Grace,” “Go Rest High, On That Mountain,” “The Other Side Of The Cross,” “Sissy’s Song,” and “What A Wonderful World” were played during the service. Honorary Pallbearers for the service included April Faubion, Wade Taylor, Amy Richards, Bryan Richards, John Kelch, Jennifer Yound Lasker, Nate Yound, Michael Hartman, Amber Wilson, and Damien Hartman. A Committal of Ashes was held in the Geneva Public Cemetery following the Memorial Service. Farmer & Son Funeral Home conducted services. Online condolences may be left at www.farmerandsonfuneralhome.com. Memorials are suggested to the First Congregational United Church of Christ in Geneva.

Shelia was born March 30, 1942 in Canton Illinois to Andrew Shumaker and Etta (Kramer) Shumaker. She passed away on Oct 13, 2017 at the Fillmore County Hospital at the age of 75 years, 6 months and 13 days. Shelia grew up in Illinois with her... View Obituary & Service Information

The family of Shelia R. Richards created this Life Tributes page to make it easy to share your memories.

Shelia was born March 30, 1942 in Canton Illinois to Andrew Shumaker...

Send flowers to the Richards family.