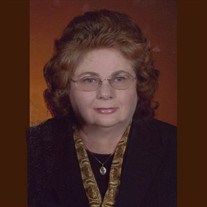 Sherrie Kay Andrews was born to Arthur Holland Pate Sole and Mildred Sylvia Heath Sole on February 27, 1941, at Geneva, Nebraska, and passed away January 1, 2016, at home in Geneva, at the age of 74 years, 10 months, and 5 days. She was the youngest of four children with one sister and two brothers. Sherrie’s father died when she was 6 years old, he had been sick for some time. Her mother, Mildred, worked diligently to support the four children. Sherrie’s sister and brothers also had a heavy load helping support their family. Sherrie began working at a young age in the café that her mother owned. She continued working at other cafes throughout her High School years. Sherrie graduated from Geneva High School in 1958 and excelled in math and science. After graduation she enrolled in the Lincoln School of Commerce. She graduated in July 1960 with a degree in Junior Accounting. She worked for a large mechanical contractor in Lincoln, doing the payroll. Sherrie was married to Alfred Lyle Andrews of rural Diller, Nebraska, on February 3, 1961, and to them two children were born. The couple traveled site to site across the United States with Alfred working on the Atlas Missile Program for two years. During this time, their first child, a daughter, Kim, was born. Alfred was offered a job with the Minuteman missile program and they traveled to Rapid City, South Dakota. At the front gate of the Air Force base, Alfred said he would like to return to Geneva to start an electrical contracting business. Sherrie responded with “let’s go” and Alfred made an abrupt U-turn and headed for home. Sherrie’s prior business experience was a key component of the successful company that they started, Andrews’ Electric. Sherrie kept the accounting for several businesses, including Andrews’ Electric and Midwest Steel Fabricators. She also volunteered with Brownies, Cub Scouts and Boy Scouts while Kim and Jeff were active in scouts. Sherrie claimed to have no hobbies, but she was always a care giver. If she wasn’t helping family members, she would care for friends and neighbors. Her family was her passion. Nearly every day included meals with her extended family and friends. She also enjoyed baking, reading and watching wildlife. She was a 50+ year member of the First Congregational United Church of Christ. She helped with funeral dinners, the church Thanksgiving dinners and served as a past board member of Pioneer Manor. Sherrie also completed several Southeast Community College, Continuing Education courses and was a Dale Carnegie course graduate. Sherrie was preceded in death by her parents Arthur and Mildred Sole; her sister, Ardyce Whiteley and sister-in-law, Viola Sole. She is survived by her husband, Alfred Andrews; daughter, Kim (Craig) Rippe; son, Jeff (Lora) Andrews; brothers, Harold “Buzz” Sole and Keith Sole; brother-in-law, Melvin Whiteley; grandchildren, Heather (Clayton) Behmerwohld, Ryan Rippe, Daniel Andrews, Nick Andrews and Aaron Andrews; great-grandchildren, Remington Behmerwohld and Vanessa Behmerwohld, all of Geneva. Funeral services for Shirley were held on Tuesday, January 5, 2016 at 10:30 a.m. at the 1st Congregational United Church Of Christ in Geneva. Pastors Eldon & Marybeth Nicholson officiated the services. The recorded selections “One Day At A Time” and “I Saw The Light” were played during the service. Stanley Johnson also accompanied the congregation in the singing of “Amazing Grace.” Pallbearers for the service included Ryan Rippe, Nick Andrews, Daniel Andrews, Clayton Behmerwohld, Justin Sole, Keith Andrews and Merle Noel. Honorary bearers included all those that supported Sherrie in her battle with cancer. Interment was held in the Geneva Public Cemetery following the funeral service. Farmer & Son Funeral Home conducted the services. Memorials are directed to the 1st Congregational United Church Of Christ or the Geneva Rescue Squad.

Sherrie Kay Andrews was born to Arthur Holland Pate Sole and Mildred Sylvia Heath Sole on February 27, 1941, at Geneva, Nebraska, and passed away January 1, 2016, at home in Geneva, at the age of 74 years, 10 months, and 5 days. She was the... View Obituary & Service Information

The family of Sherrie K. Andrews created this Life Tributes page to make it easy to share your memories.

Send flowers to the Andrews family.