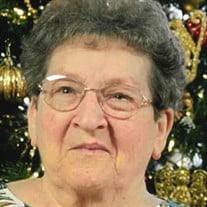 A Funeral Service for Shirley was held on Saturday, June 13, 2020 at 10:30 a.m. at Grace Lutheran Church in Geneva, Nebraska with Pastor Nicholas Mount presiding. Organist, Cherie Domeier, accompanied they congregation as they sang, “How Great Thou Art”, “A Mighty Fortress Is Our God” and “Amazing Grace. Casket Bearers included Christopher Holtmeier, Troy Delka, Timothy Barber, Matt Hafer, Derek Hafer and Jon Armstrong. Honorary Casket Bearers were Brett Delka, David Barber, Kenneth Barber, Travis Hafer, Jace Armstrong and Dawson Armstrong. Graveside Services were conducted following the funeral service at the Fairmont Public Cemetery in rural Fairmont, Nebraska. Memorials were directed to the family to be designated at a later date. Farmer & Son Funeral Home was in charge of funeral arrangements. Shirley Ann (Grote) Holtmeier passed away on June 10, 2020 at Heritage Crossings in Geneva, Nebraska at the of 91 years. Shirley was born to Ernest and Minnie (Golter) Grote on the family farm near Ragan, Nebraska on April 19, 1929. She was the youngest of two daughters. The family moved to Daykin, Nebraska where she went to school and graduated from Daykin High School. Shirley was united in marriage to Lavern W. Holtmeier at Daykin, Nebraska on April 19, 1949, and to this union 4 children were born; Diane, Sondra, Verla and Boyd. Shirley enjoyed crocheting and knitting, needle pointing, sewing, puzzles, reading, playing a good game of cards, bingo and telling family history stories. She helped with 4-H during her children’s 4-H years and later enjoyed entering her own crafts and canning in open class at local fairs. She loved baking and her specialty was cinnamon rolls. She never went to a family get-together without 2 pans, one to eat and one to leave. Her other specialty was homemade Runzas. She was a member of the Trinity Lutheran Church of Grafton while they lived in Fairmont, Nebraska and when they moved to Rockville, Nebraska, she became a member of Bethlehem Lutheran Church in Ravenna, Nebraska. Her faith was very important to her and she always had a positive attitude and love for everyone. Shirley was preceded in death by her husband, Lavern Holtmeier; daughters, Sondra Hafer and Diane Delka and son, Boyd Holtmeier Shirley is survived by her daughter, Verla (John) Barber of Lincoln, Nebraska; son-in-laws, Richard Hafer of Fairmont, Nebraska and Dale Delka of Superior, Nebraska; daughter-in-law, Paula Holtmeier of Hay Springs, Nebraska; 16 grandchildren and 29 great-grandchildren. She is also survived by her sister, Virginia Haake of Lincoln, Nebraska.

A Funeral Service for Shirley was held on Saturday, June 13, 2020 at 10:30 a.m. at Grace Lutheran Church in Geneva, Nebraska with Pastor Nicholas Mount presiding. Organist, Cherie Domeier, accompanied they congregation as they sang, &#8220;How... View Obituary & Service Information

The family of Shirley A. Holtmeier created this Life Tributes page to make it easy to share your memories.

A Funeral Service for Shirley was held on Saturday, June 13,...

Send flowers to the Holtmeier family.