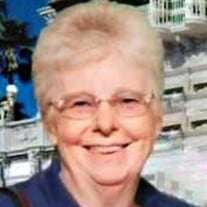 A Memorial Service for Shirley will be held on Thursday, August 5, 2021 at 11:00 a.m. at the United Church Of Christ in Exeter, Nebraska with Pastor Stuart Davis presiding. No Visitation will be held as Shirley's wishes were to be cremated. A Private Family Inurnment will be held at a later date at the Fort McPherson National Cemetery in Maxwell, Nebraska. In Lieu of Flowers - Memorials are to be directed to the Exeter United Church of Christ or to the Exeter American Legion Wm. Sullivan - Post 218. Shirley Jean (Franzen) Janes was born south of Exeter, Nebraska on the family farm on December 21, 1939 to Arnold and Rose (Korensky) Franzen. She was one of seven children. Shirley grew up on that farm and attended the Exeter Public Schools where she graduated high school in 1957. On September 13, 1958, Shirley was married to Dencel Janes at the old Congregational Church in Exeter. To this union, three children were born, Kathryn, Carmen, and Robert. Although Shirley had the occasional job around town, her main focus was on family. Yearly summer vacations were always looked forward to but primary focus was on the next family gathering. Canning beets and butchering chickens were some of the working gatherings and every holiday was enjoyed with her siblings and the many nieces and nephews. In the early years of marriage, card parties, hamburgers at Mason’s Café, and a drink or two at one of Exeter’s taverns were some of the social activities she enjoyed. Her biggest enjoyment came when watching her children’s activities, mainly sports but all school activities were enjoyed equally. After her children had grown and gone on to college and the military, Shirley and Dencel concentrated more on traveling. Many trips were organized by her brother, Len, and included their siblings and their spouses. Len named this the Fiasco Tours Group. It was an appropriate name given the fact that any event, planned or unplanned, had the ability to turn sideways at any time. But the ship always got righted and a good story was added to the trip. Many trips were taken with two journeys to Europe and a trip to Hawaii being major highlights. On September 23, 2004, after 46 years of marriage, Dencel passed away. This was a very tough time but with the help of family and the community, Shirley was able to carry on and continue to enjoy life. Around this time, Shirley worked the lunch hour at Gator’s Pub in Exeter. This may have been more social hour than work hour but she did enjoy the job. Of the many things the job had to offer was an expansion of her vocabulary. Most of those words cannot be mentioned in this setting but she found humor in it and considered it a minor hazard of the job. Shirley’s love for traveling continued after Dencel’s passing with trips to San Diego to visit her daughter, Carmen, and Palm Springs to visit her brother, Len. Shirley had one last traveling hurrah in her when a smaller version of the Fiasco Tours group went to Thailand. The highlight of the Thailand trip was riding an elephant. Until the day she passed, she still couldn’t believe that “this little farm girl from Nebraska” went around the globe and rode an elephant. Traveling eventually stopped and wasn’t desired anymore, she’d had enough of airplanes so she chose to stick close to home. Shirley loved her downtown apartment and how it kept her close to the action. Crossword puzzles and reading took up a lot of her time but she truly loved her daily trips about a block south for her morning coffee so she could catch up on all the news that had transpired since her last cup the day before. Staying active in her church and Post 218 Legion Auxiliary were also things she enjoyed. It is safe to say, Shirley loved Exeter, Nebraska. Shirley was preceded in death by her husband Dencel; sister, Ruth and son-in-law, Paul Zagozda. She leaves to mourn her passing, daughters, Kathy Zagozda and Carmen Waters (Bill) and son, Bob Janes (Katie Taylor). Seven grandchildren; Chris Waters, Sean Waters, Anna Huelle, Jacob Zagozda, Rachel Zagozda, Ashlee Murphy, and Levi Janes and six great children; Savannah and Kelsy Waters, Ashton and Daxton Murphy, Michael and P.K. Huelle; sisters, Frances Nelsonsister, Annie Griese and Sandi Jones and brother-in-law, Ronald; brothers, Raymond Franzen and Len Franzen and brother in law, Donald Lancaster.

A Memorial Service for Shirley will be held on Thursday, August 5, 2021 at 11:00 a.m. at the United Church Of Christ in Exeter, Nebraska with Pastor Stuart Davis presiding. No Visitation will be held as Shirley's wishes were to be cremated. A... View Obituary & Service Information

The family of Shirley J. Janes created this Life Tributes page to make it easy to share your memories.

A Memorial Service for Shirley will be held on Thursday, August...

Send flowers to the Janes family.