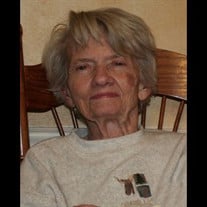 A Funeral Service for Shirley will be held on Monday, October 16, 2017 at 10:00 a.m. at the Farmer Funeral Home in Exeter. Father Mark Pfeiffer will officiate the service. A Graveside Service will be held in the Exeter Cemetery following the Funeral. Visitation will be Sunday from 4:00 p.m. to 8:00 p.m. at the Farmer Funeral Home in Exeter. Shirley Ann Jones was born to Rudolph & Anna (Krejdl) Urban on July 3, 1933 at Crete, Nebraska, and passed away on October 11, 2017, at her home in Rock Hill, South Carolina at the age of 84 years, 3 months, and 8 days. She was one of 2 children born in the family. Shirley grew up on a farm near Exeter and graduated from Exeter High School. Upon high school graduation, Shirley lived in Santa Ana, California, Denver, Colorado, and finally Lakewood, Colorado, where she spent the most time from 1975 to 2015. The last two years of her life were spent in Rock Hill, South Carolina living with her daughter Cindy. Shirley was married to Robert Jones of Belleville, Kansas in June of 1954. Four children were born to this union: Robert, Cindy, Jeffrey, and Patrick. Shirley went to college and earned a Bachelor’s Degree in Computer Science and systems analytics. At a time when many women were stay at home mother’s, this was a remarkable feat for her. She accepted the challenge head on, and was successful at it. She became a mainframe computer programmer working for companies such as Petro Lewis, Blue Cross/Blue Shield Insurance, and The State Of Colorado. She wrote programs for Airlines, Colleges, Oil Companies, Healthcare Companies, Finance companies, and several other large companies. Shirley said at one time that she considered becoming an air traffic controller before entering the computer-programming field, but changed her mind because she didn’t want to succumb to ‘burnout’ because she wanted a career that would allow her to provide for her family. This was evident as she continued to work in to her 80’s. In March of 2016 she received the Colorado State Flag which flew at the State Capitol in honor of her outstanding service in her field of work. Outside of work, Shirley had many other interests. She enjoyed being involved in the Our Lady Of Lourdes Catholic Parish, she excelled in music learning to play the drums and saxophone, she was also a member of the ‘Polka Dot Singers’ in her younger years, she enjoyed cooking, nature and the effects of natural healing. She also had a strong interest in automobiles and airplanes. She specifically knew a lot about mechanics and she could name nearly any type of plane in the sky. Shirley was preceded in death by her parents Rudolph and Anna Urban; ex-husband Robert James Jones; and son Robert Lee Jones. She is survived by her children and spouses Cindy Hull of Rock Hills, South Carolina, Jeff & Cindy Jones of Strasburg, Colorado, and Patrick & Satu Jones of Chester, South Carolina; grandchildren Christopher Jones, Aimee Cavoto, Leah Hull, Kristi Hull, Nicole Hull, Andrew Jones, Joseph Jones, Kyele Jones, Emily Jones, Hannah Jones; and sister Arlene Edelman of York, Nebraska.

A Funeral Service for Shirley will be held on Monday, October 16, 2017 at 10:00 a.m. at the Farmer Funeral Home in Exeter. Father Mark Pfeiffer will officiate the service. A Graveside Service will be held in the Exeter Cemetery following... View Obituary & Service Information

The family of Shirley A. Jones created this Life Tributes page to make it easy to share your memories.

A Funeral Service for Shirley will be held on Monday, October...

Send flowers to the Jones family.