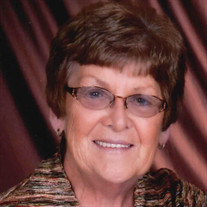 A Public Memorial Graveside Service for Shirley will be held on Friday, October 22, 2021 at 3:00 p.m. at the Bohemian National Cemetery in Milligan, Nebraska with Father Brendan Kelly presiding. ********************* A Memorial Mass of Christian Burial for Shirley was held on Thursday, March 11, 2021 at 10:30 a.m. at St. Wenceslaus Catholic Church in Milligan, Nebraska with Father Brendan Kelly presiding. Organist, Karen Filipi, accompanied the congregation as they sang, “Amazing Grace”, “You Are Mine”, Here I Am, Lord” and “How Great Thou Art”. Memorial contributions were directed to the family to be designated at a later date in memory of Shirley. Farmer & Son Funeral Home was in charge of funeral arrangements. Shirley L. Marintzer was born to Amelia (Mollie) Woita and Claude Purvis on February 17, 1946 in Wahoo, Nebraska and passed away March 6th, 2021 at Tabitha Care Center in Crete, Nebraska at the age of 75. She was a twin of Sharon Brecka. She lived on a farm near the Plasi, Nebraska area until the age of 3. In 1949, she moved to Abie, Nebraska with her grandparents, Anton and Lillian Woita. She attended Abie Grade School through the 8th grade. Shirley attended school at David City High for her freshman year and then transferred to the newly opened Aquinas Catholic School and graduated from there in May of 1964. Shirley was married to Dwaine Divis on November 12, 1966. With this union came two beautiful daughters, Renee and Lorie. On January 17, 1991 she married Francis “Sonny” Marintzer. Shirley was a loving, generous, kind, friendly and an all-around wonderful person. She loved gardening, flowers, bird watching and road trips. She enjoyed sitting on the patio visiting with anyone who may have stopped by. Shirley worked as a contracting officer for the National Guard for over 20 years. Shirley and Sonny owned and operated the Frosty Mug in Milligan, Nebraska for several years. Shirley later worked at Weaver Pharmacy as a clerk. There was a very exciting and unbelievable time for Shirley and her twin sister, Sharon, finding their biological father, Claude Purvis, on October 31, 1980. On January 30, 1981, they went to Sacramento, California to meet him for the first time. It was a very heartwarming experience and a dream come true. They had almost 4 precious years of communicating by phone through letters and trips to visit each other. He passed away in May of 1984. Shirley is survived by her husband, Sonny; her daughters, Renee (Blake) Wagner and Lorie (Jay) Eastep, her twin sister; Sharon Brecka; sister, Dawn (Pam) Christofferson-Durkee; brother, Kip (Leann) Christofferson; Sonny’s children, Tina Marintzer, Clint (Heidi) Marintzer, Chad (Anne) Marintzer; grandchildren, Alex (Ashley) Eastep, Andrew (Kaynan) Eastep, Mitchel (Abby) Eastep, Chandler Marintzer, Kaenzie Marintzer, Austin Brown, Beau Brown, Ali Marintzer; great grandchildren: Bexley Eastep, Jameson Eastep, JT Marintzer, Cannon Trujillo, Clara Brown, Dianna Buchanan, and many nieces and nephews. She was blessed with amazing friends and neighbors. She was preceded in death by her mother, Mollie Moseman, father, Claude Purvis, grandparents, Anton and Lillian Woita and brother-in-law, Gene Brecka.

The family of Shirley L. Marintzer created this Life Tributes page to make it easy to share your memories.

A Public Memorial Graveside Service for Shirley will be held...

Send flowers to the Marintzer family.