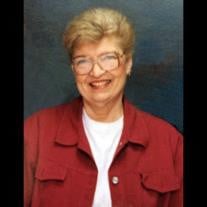 Shirley Kay Mueller was born July 16, 1933 in Los Angeles, CA to Harry and Gladys Stout, and passed from her earthly life on November 18, 2016. In the 83 years in between, Shirley led a wonderful life as a loving wife, mother, aunt, grandmother, and friend. She attended Marshal grade school, John Muir High School, and John Muir Junior College. As her children, Vince, Todd, and Tori grew, Shirley met Richard Mueller of Los Angeles and they were later joined in matrimony in Reno, NV on October 12, 1974. During their life together in L.A., Richard and Shirley enjoyed many activities together, along with family and friends. They travelled to numerous destinations across the country and the world, from Los Angeles to New York, from Italy to South America. After a busy, adventurous life spent entirely on the west coast in the Los Angeles suburbs of Pasadena, West Covina, and Arcadia, Shirley and Richard retired to the “Good Life” in Rich’s hometown of Geneva, NE where she was a member of the United Methodist Church. Once there, Shirley fully embraced the quiet small town life in America’s heartland. Away from the hustle, bustle, bright lights, and traffic of the big city, Shirley readily settled into the welcomed slower pace in Geneva. The transition to Nebraska was made easier by the presence of her caring mother Gladys and beloved dog, Hallie. Richard and Shirley continued to travel in the subsequent years, while hosting many family and friends from California in their Geneva home. Shirley enjoyed those visits immensely and valued her chance to entertain Bob and Ann, Rex and Queta, and “The Colonel” in their many visits to Geneva. Shirley was a gracious host; always making sure everyone had what they needed before worrying about herself. Along with visits from her children and in-laws Tori, Todd, Rosy, Vince, and Bridget, Shirley loved to host uncles Johnny and Charlie, along with aunts Deloris and Margaret. Much of Shirley’s time in Geneva was spent not only with friends, but she always enjoyed time with her sister-in-law Janet Bartak, and visits from her grandchildren. While her last few years were spent not as she would have planned, we were appreciative of the care she received at the Blue Valley Lutheran Home. Shirley will always be remembered for her infectious laugh and smile. She’ll be remembered for the love and care she showed for everyone she encountered in a long and meaningful life. We’ll miss Shirley, while knowing she is now at peace. Shirley was preceded in death by parents Harry and Gladys Stout and brother Dick Stout. She is survived by her husband Richard, children Vince and wife Bridget of Seffner, Florida, Todd Smale and wife Rosie of Tujunga, California, and Tori Tirotta of Azusa, California, seven grandchildren, Kami Tirotta, Kasey Rios, Kyle Rios, Lacey Smale, Taylor Smale, Sam Smale and Ricki Smale, along with two great-grandchildren Ashlynn and Tyler, her sister Beverly Downs, sister-in-law Janet Bartak and several nieces, nephews and hosts of friends. Memorial services for Shirley were held on Monday, November 28, 2016 at 11:00 a.m. at the United Methodist Church in Geneva. Pastor Michelle Gowin officiated the service. Abe Eberhardt provided prelude music on the guitar before the service. Ray & Margaret Nichols, accompanied by Ben Kaye-Skinner, performed “Precious Lord, Take My Hand,” and “Amazing Grace.” Ben Kaye-Skinner performed “Bridge Over Troubled Water.” The service concluded with the congregational hymn “You Are My Sunshine.” Honorary casket bearers included Jeff Bartak, Stan Bartak, Dale Korbelik, Bruce Nedrow, Nate Jacobsen, Larry Cerny, and Norman “Hoot” Tesar. A private committal of Ashes was held in the St. Joseph Catholic Cemetery. Memorials are directed to the Geneva United Methodist Church. Online condolences may be left at www.farmerandsonfuneralhome.

Shirley Kay Mueller was born July 16, 1933 in Los Angeles, CA to Harry and Gladys Stout, and passed from her earthly life on November 18, 2016. In the 83 years in between, Shirley led a wonderful life as a loving wife, mother, aunt, grandmother,... View Obituary & Service Information

The family of Shirley K. Mueller created this Life Tributes page to make it easy to share your memories.

Send flowers to the Mueller family.