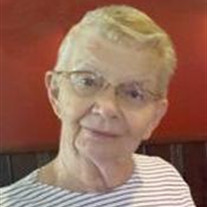 Shirley Ann Taylor was born to Arthur LeRoy Rhodes and Harriet E. (Hart) Rhodes on June 30, 1931, at the family home in the West Blue Township in York County, Nebraska and passed away September 26, 2012, at Bryan LGH East Hospital in Lincoln, at the age of 81. She was one of four children in the family. Shirley grew up on the family farm and attended school at Districts 101 and 98. She graduated from Beaver Crossing High School in 1948. On January 10, 1954, she married Daryl D. Taylor and they moved to a farm north of Exeter, and to them four children were born. In 1989, Daryl and Shirley retired from farming and moved to Cordova. Shirley was a homemaker and was also active in the family farming operation. She enjoyed gardening, fishing, golfing, painting and spending time with her grandchildren and great-grandchildren. Shirley was a member of the Methodist Church in Beaver Crossing, until she married Daryl, and then transferred her membership to the United Methodist Church in Exeter. She was a member of the Exeter United Methodist Women, Up-N-Atom Extension Club, West Blue Social Club and the American Legion Auxiliary Unit 359. Shirley was preceded in death by her parents, Arthur and Harriet Rhodes of Waco; her daughter, Lynn Marie Taylor of Exeter; her sister, Mary Naber and her husband, Raymond, of Utica; and her brothers-in-law, Paul Geis of Beaver Crossing; Rex Baller of Oakland, Iowa; and Jerome Becker of Exeter. She is survived by her husband, Daryl Taylor of Cordova; her daughters, Sherry Taylor and Cindy (Mike) Korsakas of Lincoln, and Kathy Wiemer and friend John Kessler of Gresham; her brother, Stanley (Pearle) Rhodes of Exeter and her sister, Betty Geis of Beaver Crossing and her sisters-in-law Darleene Becker of Exeter, and Donna Baller of Oakland, Iowa and by her six grandchildren and two great-grandchildren. Memorial service for Shirley will be Monday, October 1, 2012, at 11:00 a.m. at the United Methodist Church in Exeter, Nebraska. Private family inurnment will be in the Exeter Cemetery. No Visitation. Memorials are directed to the Exeter United Methodist Church or the Cordova American Legion Auxiliary in lieu of flowers.

The family of Shirley A. Taylor created this Life Tributes page to make it easy to share your memories.

Send flowers to the Taylor family.