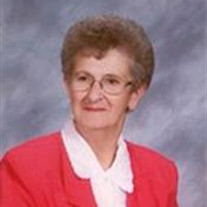 Shirley May (Fox) Thomsen was born April 23, 1936, to George Fox and Elizabeth (Kahler) Fox in rural Fillmore County. She passed away on May 12, 2011, at the St. Elizabeth Regional Medical Center in Lincoln, Nebraska, at the age of 75 years, and 19 days. Shirley was baptized in the United Brethren parsonage in rural Fillmore County and was confirmed in the Lutheran Church in Saronville in 1953. She attended school at District 79 and Geneva Public School. Shirley was married to Harland Scheierman on April 10, 1953. They were divorced and she was married to Richard Thomsen on March 8, 1968. Shirley had a daughter Shela and 2 sons Robert (Bob) and Jeffrey (Jeff). As a young woman she worked in several Café’s. She also worked for McPeck Cleaners in Harvard. From 1959 to 1966 she worked at the Hastings State Hospital and later transferred to the Lincoln Regional Center. After her marriage to Richard she was a farm wife and mother. She joined Trinity Lutheran Church where she taught Bible School and Sunday school and served on the Church Council. Shirley joined the American Legion Auxiliary in 1975, where she held several offices. She worked in the fields detasseling for 23 years. She also worked for Underwood Auctions getting sales ready and for several years at the Cordova Locker. Shirley loved her yard work and her garden. In earlier years she also loved to bowl. Shirley was preceded in death by her parents, her husband Red, sisters Esther and Annabelle and a grandson Scott. She is survived by her daughter Shela Smith Roger Ingalls of Fairmont, Nebraska and two sons Bob Thomsen and Bev Mohlman of Fairmont, Nebraska and Jeff Thomsen and wife Heather of Geneva; brother Dean Fox and wife Sharon of Kearney, Nebraska and sister Dorothy Ballou of Exeter, Nebraska. 6 grandchildren 7 great grandchildren and many nieces and nephews. Funeral services were conducted from the Trinity Evangelical Lutheran Church in Cordova, Nebraska on Monday, May 16, 2011, with Pastor Karen Tjarks officiating. Velva Lutz accompanied the congregation who sang “In The Garden”, “How Great Thou Art” and “Precious Lord Take My Hand.” Pallbearers were Jason Smith, Logan Thomsen, James Thomsen, Doug Thomsen, Mike Thomsen and Dylan Colgrove. Honorary bearers were Donny Mason, Dillon Steinacher and Neal Thomsen. Interment was in the Zastrow Cemetery with Farmer Funeral Home in charge of the arrangements. Memorials are directed to the Church.

Shirley May (Fox) Thomsen was born April 23, 1936, to George Fox and Elizabeth (Kahler) Fox in rural Fillmore County. She passed away on May 12, 2011, at the St. Elizabeth Regional Medical Center in Lincoln, Nebraska, at the age of 75 years,... View Obituary & Service Information

The family of Shirley M. Thomsen created this Life Tributes page to make it easy to share your memories.