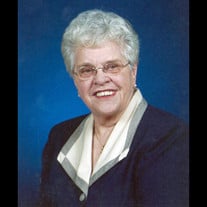 Shirley was born to Clinton and Naomi (Shore) Allgood on November 2, 1933, in Auburn, Nebraska. She passed away at Heritage Crossings in Geneva, Nebraska on June 22, 2018, at the age of 84. She was the eighth of nine children; Clinton, Junior, William, Frank, Charlie, Bonnie, Lettie, Harry and Geraldine. The family moved from Auburn to Geneva in 1945 and Shirley attended school in Geneva from sixth grade through high school graduating with the class of 1951. After high school, Shirley worked for the telephone company as an operator. Shirley married Don Ward, her high school sweetheart, on February 3, 1952, and joined him on the family farm north of Geneva raising livestock and farming. Working side by side on the farm they raised pigs, chickens, and cattle. She helped plow the land and irrigated by moving sprinkler pipe through the field with the whole family. Later on, Shirley enjoyed working part-time at the Fillmore County Assessor’s office and also Cumberland’s Style Shoppe. From this union four children were born: John Ward, Patricia Engle, Nancy Hansen and Tammy Jo Ward. Shirley devoted her life to caring for and nurturing her children. Those children blessed Shirley and Don with eight grandchildren, Tiffany and Kevin Ward, Chad, Amy (Engle-Evans), and Cody Engle, Megan (Robison), Jennifer (Hansen-Richmond), and Laura Oliva. They also had 11 great-grandchildren to love and enjoy. Shirley’s passion was her family. Shirley was an active member of both the church and community. She was a member of Eastern Star, being a past Worthy Matron and taught Sunday School for many years. Shirley also belonged to the Rebecca Lodge taking her turn to serve as Noble Grand. She was a Girl Scout leader, making memories with her daughters and other young girls in her troop. Some of Shirley’s favorite activities were extension club, playing cards, reading and jigsaw puzzles. She truly loved her “lunch bunch” friends. Her favorite activity at Heritage Crossings was playing Bingo and winning candy for her great-grandchildren. Summers were always busy as 4-H was a big part of every summer as her children grew and began showing cattle at the Fillmore County fair, Nebraska State fair and Ak-Sar-Ben. Whenever it rained, the family would pack up the tent and boat, gather up the fishing poles and head to the lake, usually Harlan County Reservoir, for a camping trip. There were fish to catch, clean and eat as well as water skiing and just playing in the water to keep everyone entertained. Shirley was preceded in death by her husband Don, her parents, brothers and sisters of both families and a grandson, Matthew Donald Hansen. Shirley is survived by son John (Barbara) Ward and daughters Patricia (Robert) Engle of Geneva; Nancy Hansen and Tammy Ward (Dan Parsons) of Lincoln; eight grandchildren, Tiffany and Kevin Ward (fiancée Sarah Seberger), Chad (Jennifer) Engle, Amy (Ryan) Evans, Cody Engle, Megan (Eric) Robison, Jennifer Hansen-Richmond, Laura (Jim) Oliva; 11 great-grandchildren; a sister Geraldine Daniels; nieces and nephews and a host of friends. A Funeral Service for Shirley was held on Wednesday, June 27, 2018 at 10:30 a.m. at the United Methodist Church in Geneva. Kim Dunker officiated the service. Melissa Houchin accompanied the congregation in the singing of “Amazing Grace.” She also accompanied Charlotte Bumgarner in the singing of “In The Garden,” “The Old Rugged Cross,” and “It Is Well With My Soul.” Pallbearers for the service included Tiffany Ward, Kevin Ward, Chad Engle, Amy Engle-Evans, Cody Engle, Megan Robison, Jennifer Hansen-Richmond, and Laura Oliva. Interment was held in the Geneva Public Cemetery following the Funeral Service. Farmer & Son Funeral Home was in care of the arrangements and online condolences can be left at www.farmerandsonfuneralhome.com. Memorials are suggested to the United Methodist Church in Geneva.

Shirley was born to Clinton and Naomi (Shore) Allgood on November 2, 1933, in Auburn, Nebraska. She passed away at Heritage Crossings in Geneva, Nebraska on June 22, 2018, at the age of 84. She was the eighth of nine children; Clinton, Junior,... View Obituary & Service Information

The family of Shirley G. Ward created this Life Tributes page to make it easy to share your memories.

Shirley was born to Clinton and Naomi (Shore) Allgood on November...