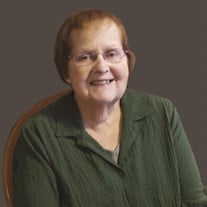 A Funeral Service for Shirley will be held on Tuesday, December 5, 2017 at 10:30 a.m. at the United Methodist Church in Geneva, Nebraska with Pastor Michelle Gowin officiating. Visitation will be held on Monday, December 4, 2017 from 4:00 p.m. until 8:00 p.m. at Farmer & Son Funeral Home in Geneva, Nebraska. Graveside Services will be held following the funeral service at the Geneva Public Cemetery. Memorials are to be directed to the family for a later designation. Shirley Ann (Girmus) Zeutzius-Moroney was born to Johnnie Girmus and Wilma J. Girmus on August 21, 1944 at Geneva, Nebraska, and passed away November 29,2017 at AngelsGrace Hospice in Oconomowoc, Wisconsin at the age of 73. She was granted her angels wings with her three sons at her side holding her hands. She was one of 4 children in the family. Shirley grew up on a farm just south of Geneva and graduated from Geneva High School in 1962. She attended one year at Nebraska Wesleyan before she married Carl Zeutzius in 1964 in Geneva. After getting married they moved to Cheyenne, Wyoming for a brief period before moving to Hartland, Wisconsin. Even though she lived in Wisconsin, her heart never left Nebraska. Her trips back to see family and friends during the summer and almost every Christmas was a very special time for Shirley and family. After her divorce, she began her relationship with her husband James in 1982 and on April 1, 2001 they married. They lived in a cottage with a beautiful view of Okauchee Lake. She cherished having family and friends to the lake and always had a smile on her face. There was always plenty of food for everyone too. It became a tradition that after the Stone Bank Parade for the 4th of July, family and many friends would head to the lake to celebrate. She worked as a school bus driver for Oconomowoc Transport for many years before retiring. She loved the children she drove and spoke often about them to her family including the time just before passing. Growing up on the farm she developed a special love for animals and she loved to ride horses including Scuffy Kim. She also spoke often of other pets including the wonderful family dog Tracker, and her incredible cat, Cade. Cade was allowed to be with her during her final days, which meant so much to Shirley. She was an incredible wife, friend, mother, grandmother and great grandmother who had a special love for everyone around her not to mention her love for making and tasting desserts. Shirley was preceded in death by her father Johnnie, mother Wilma, and brother John Dale. She is remembered with love by her husband James, currently in hospice care in Oconomowoc Wisconsin; son Carl of Lincoln, NE; son Robert (Aimee) of Oconomowoc Wisconsin, and Mark (Bonnie) of Town of Lisbon, Wisconsin. Grandchildren; Tanner, Emma, Ashley, Heather, Alex, Davis and Claire. Great grand-son Luca. Two stepdaughters, Linda Moroney of Oconomowoc Wisconsin, Mary Ellen Olsen of Sturtevant Wisconsin and four step grandchildren; Zakk, Marissa, Brock and Mark. Brother Richard (Vickie) of Geneva, Nebraska; sister Connie (Joe) Monteforte of Geneva, Nebraska; sister-in-law Kay Girmus of Cedar Creek, Nebraska and many nieces and nephews.

A Funeral Service for Shirley will be held on Tuesday, December 5, 2017 at 10:30 a.m. at the United Methodist Church in Geneva, Nebraska with Pastor Michelle Gowin officiating. Visitation will be held on Monday, December 4, 2017 from 4:00 p.m.... View Obituary & Service Information

The family of Shirley Ann (Girmus) Zeutzius-Moroney created this Life Tributes page to make it easy to share your memories.

A Funeral Service for Shirley will be held on Tuesday, December...

Send flowers to the Zeutzius-Moroney family.