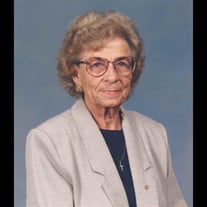 Sophia Emma Jacobs was born on November 16, 1923 on a farm 1 ½ miles north of Ohiowa, Nebraska to Frederick and Emma (Gewecke) Saatmann. She passed away on February 19, 2022 at Fairview Manor in Fairmont, Nebraska the age of 98 years 3 months and 3 days. Sophia was born into a hard working family and stayed on the farm her whole life. She loved livestock the most. She occasionally would recount memories of the horses her father raised and cared for, but especially her fondness of baby colts and “losing a colt was like a death in the family.” Her farm life carried on, experiencing both good years and tough ones including the “dust bowl” years. She attended School District 40 in Ohiowa into her third year of high school when she became ill with scarlet fever and pneumonia, ending her formal school years. She met her husband John (Jack) Jacobs, who was serving in the Air Force at Bruning, Nebraska. during WWII. They were married on December 27, 1944. After the war’s end, they worked together on the farm with two children born to their marriage: Rosilyn Dawn and John Michael. They started raising Angus cattle in the 1950’s and Sophia still loved the accomplishments of the life-long care for animals. After moving to Fairview Manor, she still would ask about the cows and on short visits home loved seeing her cats. Jack and Sophia enjoyed traveling with friends, especially Ivan and Pat Dunse. Their travels included Pittsburg, Niagara Falls, Washington, DC and also the Rose Parade in Pasadena. Sophia raised a garden most every year, canning some of her produce. She always looked forward to the day she could cut fresh lettuce, wilting it with bacon and serving it with new potatoes and cream peas. One other specialty was making angel food cake. Sophia also had a fondness for violets, geraniums, and pansies. Her love of cooking and baking occupied a lot of her time. She baked loaves of fresh bread for over 10 years for the Ohiowa Methodist church communion service, and she could always be counted on for making potato soup for church benefit dinners and fundraising events. Sophia attended the Ohiowa Methodist Church regularly and after uniting with the Bruning, Davenport, Shickley and Ong churches forming the Triune Parish, she met and became friends with student ministers and members of those churches. After the closing of the Ohiowa Methodist Church, Sophia joined the United Methodist Church in Geneva and loved attending there. Sophia was preceded in death by her father and mother, husband, daughter, and half-sister, Maggie Sadlo. Survivors include son Jack and Sharon Jacobs of Geneva; son-in-law Michael Kaiser of Hastings; grandchildren Michael Kaiser and wife Tracey of Hastings, Michele (Kaiser) Martin and husband Dale of Fairfield, Jennifer (Jacobs) Petersen and husband Jon of Friend, Julie (Jacobs) Bundy and special friend Tim Kraft of Seward; great grandchildren Michael, MacKenzie, Jacob, and Gracey Kaiser of Hastings, Jamey Sealy and wife Lynlee of Davenport, Miranda Sealy of Columbus, Andrew Petersen of Beaver Crossing, Ashleigh (Petersen) Ferry and husband Miko of Beaver Crossing, Dustin Bundy and wife Caci of Seward; great-great grandchildren Kamerin, Kesley and Kile Sealy, Natalie and Cambrie Linscomb of Davenport, Sophee Sealy of Columbus, Nova Reign Ferry of Beaver Crossing, and Lindsay Nicole Bundy of Seward; and honorary granddaughter, Araceli Rodriguez and her children. A Funeral Service for Sophia was held on Friday, February 25, 2022 at 10:30 a.m. at the United Methodist Church in Geneva, Nebraska. Pastor Doug Griger and Kim Dunker presided over the Funeral Service. The recorded selections “He Touched Me,” “Precious Lord, Take My Hand,” and “Softly & Tenderly” were played during the Funeral Service. Pallbearers for the Service included Michael Kaiser, MacKenzie Kaiser, Jacob Kaiser, Gracey Kaiser, Andrew Petersen, Ashleigh Petersen-Ferry, and Dustin Bundy. A Graveside Service was held in the Ohiowa Public Cemetery following the Funeral Service. Farmer & Son Funeral Home was in care of the arrangements and online condolences can be left at www.farmerandsonfuneralhome.com Memorials are suggested to the Fillmore County Hospital Foundation.

Sophia Emma Jacobs was born on November 16, 1923 on a farm 1 ½ miles north of Ohiowa, Nebraska to Frederick and Emma (Gewecke) Saatmann. She passed away on February 19, 2022 at Fairview Manor in Fairmont, Nebraska the age of 98 years 3 months... View Obituary & Service Information

The family of Sophia E. Jacobs created this Life Tributes page to make it easy to share your memories.

Send flowers to the Jacobs family.