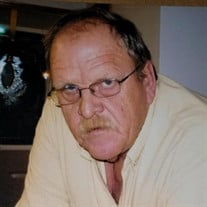 Stanley Eugene Allgood was born on November 7, 1950 to Charlie and Dorothy (Lovegrove) Alllgood in Geneva, Nebraska. He was the oldest of 4 children. Stan passed away on February 11, 2021 in Falls City, Nebraska at the age of 70 years, 3 months, and 4 days. Stan was baptized and confirmed at the Fairmont Methodist Church. Stan grew up on a farm north of Geneva. He went to school at Geneva Public School, graduating with the class of 1969. He furthered his education at Milford Tech in diesel mechanics. After graduating, he went to work for Duteau in Lincoln before returning to Fairmont working for Ashby Farms. He later started driving truck for Co-Op and finished his truck driving career at Wynne Transport. As an active member of the community, he had been an active member of the Fairmont Volunteer Fire Department, the Masonic Lodge, and the Shrine. Stan was a fun-loving guy, that never knew a stranger. He appeared to be a bruiser on the outside, but was a big teddy bear on the inside. He was preceded in death by his parents, Charlie and Dorothy Allgood. He is survived by sisters, Virginia (Mike) Johnson, Sutton, Nebraska; Vicki Allgood of Kent, Washington; brother, Steve Allgood, Geneva, Nebraska; nephews, Cory Johnson (Godson) and children Taylor, Mason, and Clay of Gretna, Nebraska, Scott (Stephanie) Johnson, and children Ellie and Simon of Minneapolis, Minnesota, Adam (Melanie) Johnson, and children Amelia and Fletcher of Lincoln, Nebraska, Eric (Angie) Allgood, and children Jackson and Jacy of Henderson, Nebraska, Aaron Allgood of Albion, Nebraska; Special friends, Jerry (Heidi) Wachtel and children Hope and Matthew of Carleton, Nebraska; and a host of relatives and friends. A Memorial Service for Stan was held at 10:30 a.m. on April 17, 2021 at the United Methodist In Geneva with Pastors Doug Griger & Mary Scott will officiate the Memorial Service. The music selections were “How Great Thou Art”, “Amazing Grace,” and “Go Rest High on that Mountain”. Honorary Pallbearers for the service were Cory Johnson, Scott Johnson, Adam Johnson, Eric Allgood, Aaron Allgood and Matthew Wachtel. A Graveside Committal of Ashes took place in the Geneva Public Cemetery following the Memorial Service. Farmer & Son Funeral Home was in charge of the arrangements and online condolences can be left at www.farmerandsonfuneralhome.com Memorials are suggested to the family going to Geneva Rescue and Geneva Boys Pond.

Stanley Eugene Allgood was born on November 7, 1950 to Charlie and Dorothy (Lovegrove) Alllgood in Geneva, Nebraska. He was the oldest of 4 children. Stan passed away on February 11, 2021 in Falls City, Nebraska at the age of 70 years, 3 months,... View Obituary & Service Information

The family of Stanley Allgood created this Life Tributes page to make it easy to share your memories.

Stanley Eugene Allgood was born on November 7, 1950 to Charlie...

Send flowers to the Allgood family.