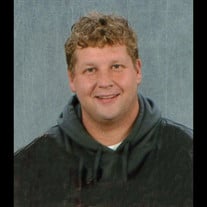 A Funeral Service for Steven will be held on Thursday, March 29, 2018 at 11:00 a.m. at the Immanuel Lutheran Church in Lincoln, Nebraska, 2001 S 11th St, Lincoln, NE 68502. A private family Graveside Service will be held at the Tobias City Cemetery, rural Tobias, Nebraska. Visitation will be held on Wednesday from 4:00 p.m. to 8:00 p.m. with family present from 4:00 p.m. to 6:00 p.m. at Farmer & Son Funeral Home in Geneva, Nebraska. Memorials are suggested to the family for future designation. Steven T. Campbell was born on April 23, 1982 at McCook Community Hospital to Timothy G. Campbell and Janile J. (Endorf) Campbell. On May 16, 1982, by John K Raess, at Peace Lutheran Church in McCook, Nebraska, through the washing of holy baptism, he became a child of God and an heir of eternal salvation. At his confirmation on March 23, 1997, Steven renewed his baptism vow through the Rite of Confirmation and was given the forgiveness of all his sins and the redeeming grace of our Lord Jesus through the gift of Christ's body and blood by means of The Lord's Supper. Steven attended Zion Lutheran School, grades lst – 8th, Meridian Public School, 9th- 12th, and received an Associates Degree in Building Construction from Southeast Community College. When he was only 5 years old, he found a small board and a rusty nail and spent the afternoon trying to pound that rusty nail into the board. Another time, Steven and his friend, Nathan Meyer, spent the afternoon building a cage, hoping to catch a rabbit to give to his mother on Mother's Day. His mother hoped there wasn't a rabbit dumb enough to climb into that cage. At the age of 16 he started working at Pizza Hut, first in Geneva, then Seward, and Lincoln. After completing his sophomore year, he was hired by Oetting's Detasseling as a crew coach. The owner of Oetting's Detasseling at that time is currently Pastor Larry Oetting who is the officiant in today’s service. After completing college, he worked for Lenz Construction of Seward, Nebraska. Desiring to have a new adventure in life, he then began working for R.O.'s Lounge in Seward. After several years of working for Ron, he decided to go back to his first love; building construction. He then started working for Jamie Knisley and Knisley Construction and was employed there until the time of his death. His final job was working as a part-time cook at Charlie's Pub in Milligan, He cooked one fantastic prime rib, and those green beans were awesome. He was in the process of remodeling his basement, and only last Monday he told his mother that there were only a few more things that needed to be done. His family's intentions are to have those things completed, and that his wish be fulfilled. He also had a hand, or should we say ‘tool’, in helping build the Word of Life Lutheran Church in Lincoln, Nebraska, of which he was a member. The joys of his life were his three nieces and two nephews. Many times they would ask about Uncle Stevie, and come running into his arms when he walked through the door. When he wasn't around, they always were pretending to talk to Uncle Steve on the phone. Only a week before his death, he spent the day playing games with his niece. On March 25, 2018, our loving Lord who created Steven, loved Him, redeemed Him, called Him to His heavenly home at the age of 35 years, 11 months, and 2 days. He will be missed very much, but our comfort is that Steven is now in Heaven where there is happiness forever. Steven is probably tolerating the "love taps" on top of the head with a cane by his grandfather Endorf. He is survived by his mother, Janile; brother Heath and wife Morgan Campbell; sister Heather and husband Jesse Yager; Nieces, Jayda and Zoey Yager, and Brooklynn Campbell, and nephews, Barret Yager and Jaxon Campbell; Grandfather, Loren Campbell; Uncle Dwayne and Aunt Teresa Endorf; Uncle Michael and Aunt Tish Campbell; Cousins and many other relatives and friends. He was preceded in death by his father; grandparents, Herbert and Dorien Endorf; grandmother, Margaret Campbell; and two cousins. The Lord giveth and the Lord taketh away. "Lo, He giveth or He taketh; God his children ne'er forsaken; His the loving purpose solely to preserve them pure and holy." Thanks be to God for the blessings He gave to Steven and to us through the life of Steven for these past 35 years.

A Funeral Service for Steven will be held on Thursday, March 29, 2018 at 11:00 a.m. at the Immanuel Lutheran Church in Lincoln, Nebraska, 2001 S 11th St, Lincoln, NE 68502. A private family Graveside Service will be held at the Tobias City... View Obituary & Service Information

The family of Steven T. Campbell created this Life Tributes page to make it easy to share your memories.

A Funeral Service for Steven will be held on Thursday, March...

Send flowers to the Campbell family.