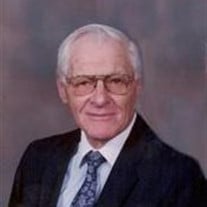 Stuart Michael Gratopp was born the son of William and Ernestine (Gehrke) Gratopp at Shickley Nebraska on December 2, 1920. Stuart passed away on September 20, 2011 at Fairview Manor in Fairmont, NE at the age of 90 years old after a very short decline in his health. Stuart attended country school in rural Shickley and Shickley High School graduating in the class of 1938. While in high school he was involved and participated in all sports taking a special interest in Baseball, playing on many teams that even traveled to other states to compete during the summers. After high school, Stuart was united in marriage to Bette Jane Larson of Geneva in 1943 while living and attending college in Denver, Colorado Stuart worked on the family farm during some very tough times in the 1930s and 40s when there was very little rain and farming was a tough go. Often times he shared many stories from that time as there were many challenges for everyone in rural America. He grew corn, grain and raised chickens to earn extra money. Stuart continued to farm over the years until retirement and also worked as an independent insurance agent for many years owning the Gratopp Insurance Agency in Geneva. Two sons, Gary and Robert were born to Stuart and Bette, as they lived on the farm in rural Shickley in the house that his great grandfather Michael Gehrke constructed in the early 1900s. When the boys grew older Gary took an interest in helping with the farm and Stuart took a great interest in son Bob’s athletics as he was part of the State Champion Geneva basketball team and played for Nebraska. He was so proud and such an advocate for son Bob travelling to Hawaii and all over the U.S to watch him play basketball. This was one of the best times in his life and he shared many of those great times right up to his passing. He was devastated upon hearing of Bob’s sudden death in 1996 and his life did forever change. He remarked numerous times that he was so lucky to still have Bette, Gary, and his two grandson’s Ryan and Ross. Stuart was an avid fan of all University of Nebraska sports and the Chicago Cubs baseball team. Much time was spent cheering on the Huskers and Cubs from home and away always discussing over the phone or in person what they should have done or could have done to win. Stuart was a member at Grace Lutheran in Geneva for 70 years and when it was hard for the couple to physically get to church he looked forward to watching it on Sunday evenings with his wife on TV. As a very typical retired farmer, he continued to take great interest in rainfall amounts both at his home in Geneva and at the farm west of town, always baffled and sometimes frustrated by the differences that often occurred. He took to the town of Geneva many times throughout the day to have coffee, tell a joke, or talk politics with whoever was willing to visit with him. He was an avid gardener raising tomatoes, beans, lettuce, onions and other vegetables. He was very passionate about his gardens and he and Bette worked together canning delicious vegetables through the years while spoiling many. This was his first year without a garden in as many years and it really bothered him. In the last year he was again faced with devastation as he lost son Gary due to a short bout with kidney disease. He drove Gary to dialysis 3-4 times a week and did all he could for his son. This took a great toll on him as he was getting up there in age himself. Both Stuart and Bette continued to lean on each other for much support, took great interest in their grandsons Ryan and Ross’s activities, and did as much as they could to help each other right to the end of their nearly 70 years together. In late July, Stuart’s health declined and after a stay in the hospital, he became a resident at Fairview Manor in Fairmont, NE. As he was reluctant to make the move to Fairmont away from his home of 41 years, he truly embraced the move and really enjoyed visiting with the fantastic staff and residents of Fairview. He had God above and some very special people looking after him to see that he had the best care. They allowed him to be comfortable and at peace with himself. He also really liked the mashed potatoes at Fairview which were his favorite food, saying they were just about as close to Bette’s His health declined more and the family was very fortunate to be at his side throughout the past weeks of his life up until his passing. Stuart was preceeded in death by his parents, sons Robert and Gary Gratopp, and brother Dale. He is survived by his wife Bette of Geneva; brother Lowell (Jan) Gratopp of Omaha; grandsons Ryan Gratopp, Ross (Jill) Gratopp both of Lincoln; great grandson Jett Gratopp of Lincoln; and a host of cousins, Nephews and Nieces. Services for Stuart were held on Friday, September 23, 2011 at 2:00 p.m. at the Grace Lutheran Church in Geneva with Pastor Stephen Kruschel officiating the service. Denise Hinrichs accompanied the congregation in the singing of “Abide With Me” and “In The Garden.” The recorded selection “God Gave Me You” was also played as a recessional. Pallbearers for the service included Larry Larson, Steve Gratopp, Pat O’Brien, Alex O’Brien, and Larry Biester. Interment was held in the Geneva Public Cemetery with Farmer & Son Funeral Home in charge of arrangements. Memorials are directed to the Grace Lutheran Church or the family .

Stuart Michael Gratopp was born the son of William and Ernestine (Gehrke) Gratopp at Shickley Nebraska on December 2, 1920. Stuart passed away on September 20, 2011 at Fairview Manor in Fairmont, NE at the age of 90 years old after a very short... View Obituary & Service Information

The family of Stuart M. Gratopp created this Life Tributes page to make it easy to share your memories.

Stuart Michael Gratopp was born the son of William and Ernestine...

Send flowers to the Gratopp family.