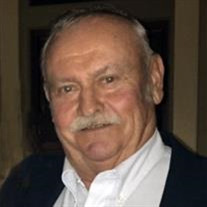 Stuart Lee Vavra was born on April 11, 1941, on the family farm north of Milligan, Nebraska, to Edward and Lillian (Kohler) Vavra and passed away on December 28, 2018, at his home at the age of 77 years, 8 months, and 17 days. He was one of three children in the family. He attended rural school District #6 and graduated from eighth grade. He then attended Milligan High School and graduated in 1958 with a class of seven. Stuart was united in marriage to Janet Ann Garrett, on March 8, 1963, in Geneva, Nebraska. To this union two daughters were born: Jana Marie and Jodene Renae. Together they made their home on the farm northwest of Milligan. Stuart worked for Lincoln Prestress, Dobson Brothers, Maury Nichols, Fillmore County, and L.J. Webb from working in the oilfields of Wyoming as a roustabout, operating heavy equipment and later building bridges and boxed culverts. He farmed the 80 acres he lived on, but his true passion was fabricating race cars. "Super Stu" started his racing career in 1958 at the age of 17 at Capitol Beach in Lincoln. The first car he ever raced was a 1932 Ford Sedan with an Olds Rocket 88 engine with the #6X. In 1967 he raced and drove a 1936 Plymouth Coupe with the #35 and his last car he ever raced was a 1979 purple Chevy Camaro. He had a very devoted pit crew, sponsors and many fans which made his success possible. During his racing career, he placed in the top ten in season points every year from 1967-1982. He met many dear friends and racers traveling from racetrack to racetrack. In 1982 after 24 years of capturing the checkered flag and competing at 17 different race tracks throughout Nebraska and Kansas, he decided to hang up his racing helmet. Super Stu was inducted into the Beatrice Speedway Hall of Fame on November 1, 2003, was a long-time member of the Central Nebraska Racing Association, and a member of the Good Old Time Racing Association (GOTRA). After Stu retired from circling the racetracks, he spent his later years helping his twin grandsons work on their race cars and giving them advice in his shop over a beer or two. He drew great pride in watching them compete. He also enjoyed attending his granddaughter’s school events, fishing with them, and giving each of them driving lessons. He was extremely proud of all the grandchildren's' accomplishments. After the passing of Janet, he reconnected with a dear life-long friend, Mary Drake. Their friendship started six decades ago with her late husband, Ike Drake. Stu, Janet, Ike, Mary and all their children shared many years of fun and memories. Over the past five years, Stu and Mary continued to enjoy each other's company and made many more memories. Stu was preceded in death by his wife, Janet; his parents, Edward and Lillian Vavra; father-in-law and mother-in-law, Pete and Edna Garrett; brother-in-law, Victor Hladky; brother-in-law and sister-in-law Dean and Charlotte Garrett; and niece Shelby Lemke. He is survived by daughter and son-in-law, Jana and Billy Slezak of Milligan; daughter and son-in-law, Jodene and Tom Lovegrove of Fairmont; grandchildren, Shane and wife Jasmine Slezak; Shawn and wife Jennifer Slezak; Taylor Slezak and fiancé Joey Gilmer all of Milligan; Whitney Lovegrove and Sydney Lovegrove of Fairmont; sister, Shirley Hladky of Seward; brother and sister-in-law, Edwin and Beth Vavra of Milligan; special friend, Mary Drake of Dorchester and family; great grandchildren Noah, Lily, Kaydence, Jade and Lennon; special furry companion, Zoie; nieces and nephew and a host of other relatives and friends. A Memorial Service was held on Monday, December 31, 2018, at 2:00 pm at the Milligan Auditorium in Milligan, Nebraska, with Kim Dunker officiating. Musical selections played were "Grandpa" and "Go Rest High on That Mountain". Honorary pallbearers were his devoted grandchildren. A private family committal of ashes took place in the Bohemian National Cemetery in Milligan. Farmer & Son Funeral Home was in care of the arrangements and online condolences can be left at www.farmerandsonfuneralhome.com Memorials are suggested to the family for future designation.

The family of Stuart L. "Stu" Vavra created this Life Tributes page to make it easy to share your memories.