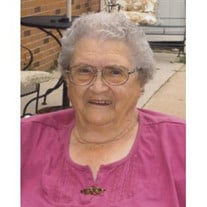 Sylvia M. (Bures) Johnson was born on May 25, 1919 to James and Ella (Schmidt) Bures on the family farm northwest of Geneva. She passed away on April 7, 2016 at Fairview Manor in Fairmont, Nebraska at the age of 96 years, 10 months, and 13 days. She attended District 81 country school and graduated from Geneva High School in 1936 at the age of 16. While she went to high school, she took piano lessons from Ruth Ann Coddington. Her apartment was upstairs in Kritner Funeral Home. After graduation, Sylvia taught piano lessons for four years to the neighbor kids, receiving $.50 an hour. At one time, she had 32 students. She traveled to their homes to teach them lessons on the piano. She met Joseph Tesar, and while going together it was war time and there were no jobs. In May of 1942, they went to Paterson, New Jersey and went to work at the Curtis Wright Aeronautical Aircraft Plant. She worked on an experimental single cylinder engine. She worked there for 6 months for $.50 an hour, working on the test cells which were 80 feet high. She would run the motor until a break down and then tear everything apart, change oil, rebuild the motor and start over. In 1944, Sylvia and Joseph were married, and a daughter, Linda Louise, was born to this union. Their marriage ended in divorce. In 1947, Ross Johnson came around looking for iron for his welding business. Sylvia and Ross were married on November 5, 1949. Ross had a son, Hubert, from a previous marriage. They worked hard on the farm. On October 30, 1955, a little farmer was born, Lowell Ross. Sylvia was a member of the First United Congregational Church Of Christ, The Geneva Jr. Township Extension Club, and the VFW Auxiliary. She liked to polka, do embroidery, crochet, and play bingo. She also like to fish, but didn’t like eating them. She was an excellent cook. No one ever left without getting plenty to eat. In January of 2010, She had enough snowdrifts and called Fairview Manor to come pick her up. She resided there until her death. She was preceded in death by her parents; her husband, Ross; her daughter-in-law Wanda Johnson; and grandson-in-law Kenneth Woodward. She is survived by her daughter, Linda (Louis) Schafer of Tobias; sons Lowell Johnson of Geneva and Hubert (Frances) Johnson of Geneva. She is also survived by grandchildren: Larry (Gina) Schafer of Tobias and their children Mikayla, Hailey, and Kolby LuAnn (Brian) Jackson of Tobias and their children Brianna, Brandon, and Bridgette, Lonnie (Jamie) Schafer of Tobias and their children Chase and Madison Lee (Shana) Schafer of Daykin and their daughter Olivia Eric (Jessie) Johnson of Milligan and their children Liberty, Logan, and Toby Justin Johnson of Geneva and daughters Kynzley and Alayna Ross (Elane) Johnson of Geneva and their son Henry Michael (Louise) Johnson of Lincoln and their children Matthew and family Connie Woodward of Fairmont and her son Kenneth III and family and her daughters Elizabeth (Keith) Jasperson and Grace Woodward and Matt. Donna (Dennis) Oliva of Milligan and their children Lindsey (Shane) Stone and family and Colton and his daughter Madison and Nathan Oliva. Funeral services for Sylvia were held on Monday, April 11, 2016 at 10:30 a.m. at the Farmer & Son Funeral Home in Geneva. Pastor Diane Ryder officiated the service. The recorded selections “In The Garden” and “How Great Thou Art” were played during the service. Pallbearers for the service included Larry Schafer, Lonnie Schafer, Lee Schafer, Eric Johnson, Justin Johnson, and Ross Johnson. Honorary bearers included all of Sylvia’s other grandchildren. Interment was held following the funeral service in the Geneva Public Cemetery. Memorials are directed to the Fairview Manor. Online condolences may be left at www.farmerandsonfuneralhome.com

Sylvia M. (Bures) Johnson was born on May 25, 1919 to James and Ella (Schmidt) Bures on the family farm northwest of Geneva. She passed away on April 7, 2016 at Fairview Manor in Fairmont, Nebraska at the age of 96 years, 10 months, and 13... View Obituary & Service Information

The family of Sylvia M. Johnson created this Life Tributes page to make it easy to share your memories.